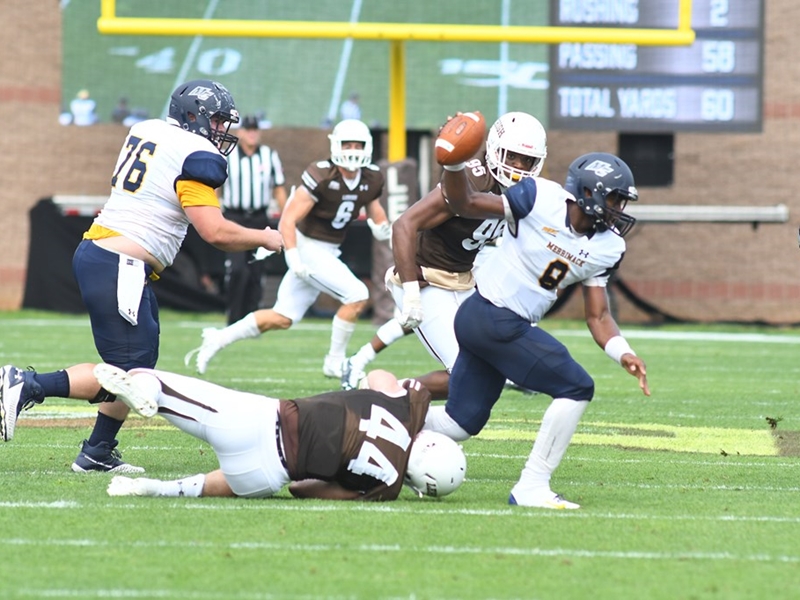 As Lehigh Mountain Hawks head coach Tom Gilmore know very well, you can’t script out your own wins. You don’t get to pick what your first-ever win as Lehigh head football coach will end up looking like. Sometimes, it doesn’t look like something out of a movie.

On a hot, humid late September afternoon at Murray Goodman Stadium, Gilmore won his first football game as head coach, finally outlasting visiting Merrimack 10-3 in a game where defense and special teams were the order of the day.

You might think that a head coach that played defense in college and prides himself on being a defensive guy might revel in a 10-3 win, but coach Gilmore did now.

“Well, it wasn’t the prettiest game for us but I’ll take it,” Gilmore said afterwards, glowing despite his words. “I’ll take an ugly win over a pretty loss any day of the week. We obviously need to improve in a lot of areas. But you know what – we found a way to win a game. This is a reward that I think our team needed desperately at this point. I’m also really proud of the way our team played today. There were a lot of things not going well – give credit to Merrimack for that – but our guys found a way to gut things out and make plays when we really needed to. There’s a lot of things to build on.”

Things looked and felt fairly grim for the home team going into the locker room down 3-0.

Quarterbacks Tyler Monaco and Addison Shoup had struggled mightily on offense, combining for 6-for-17 passing and 3 interceptions.

In fact, the only Mountain Hawk receiver that had receptions in the first half was WR Dev Bibbens, who hauled in an 80 yard strike from Monaco that seemed to be a touchdown at first before an official review correctly ruled that his knee was down at the Merrimack 1 1/2 yard line.

From there, Lehigh ran three plays at the goal line and lost yards, with PK Austin Henning pushing a 21 yard FG wide off the left hash.

Merrimack’s score came after QB Christian Carter caught WR Marquis Spence in stride on a 56 yard pass. SS Marquis Wilson caught up with Spence at the Lehigh 8 yard line on a play that didn’t seem important at the time but ended up being crucial, as the Mountain Hawk defense would stop the Warriors’ offense on three straight plays before having to settle for a 25 yard FG by PK Corey Resendes.

Coming out of the second half, Lehigh LB Keith Woetzel played down any Hollywood-type speeches in the locker room at halftime.

“On the defense, there was nothing special we needed to say,” he said. “We just needed to do our job every play, every down, and get a stop right off the bat to get the ball back to the offense.”

Out of the locker room, Merrimack received the second half kickoff and LB Pete Haffner took Carter down on a 9 yard sack to help the Lehigh defense get a 3-and-out against Merrimack, giving the Mountain Hawks some desperately-needed momentum.

The Mountain Hawk defense would put immense pressure on the Warriors offense the rest of the way. An inspired effort by the defensive line and linebackers would result in a grand total of -25 yards rushing, 6 sacks, and zero points scored.

“I think our coaching staff did a great job all week of putting in packages where we could get some pressure on the quarterback,” DE Erik Slater said, who had three of Lehigh’s six sacks. “It wasn’t just me, it was the whole D line getting there ,and a lot of guys had opportunities and a lot of guys had sacks.”

Pinned deep in their side, freshman CB TyGee Leach blocked a Merrimack punt setting up Lehigh at the Merrimack 16. From, there Henning, from the right hash, lined up for a 40 yard field goal, and nailed it, tying the game.

Q3 8:14 | BLOCKED PUNT! Corey Resendes’ punt is blocked by TyGee Leach and is recovered by Lehigh at the Merrimack 16 yard line. Mountain Hawks back in the red zone here with a chance to score. Watch: https://t.co/XQHmR4a1zr. #GoLehigh pic.twitter.com/DUKBgTIFEi


Gilmore credited special teams coach Anthony DiMichele, who played and coached at Holy Cross when Gilmore was head coach there, for getting the special teams fired up and ready.

“We try [to punt block] out of the same look, so they never know if you’re really coming or not,” an animated Gilmore said after the game. “We got the one, we came really close to another, and they also shanked one. I think all game we put them on notice and forced them to have great operation time. W e saw that in week one as well. But I thought our guys did a really good job, they really executed well. The block came on this second time that we called that particular block arrangement, and it was good to see it work.”

Going into the 4th quarter, the Lehigh offense made the play that ended up being in the difference in the game.

Dropping back to pass, Shoup saw his pocket collapse, he tucked the ball and ran it, getting a couple of blockers then turning on the jets to put the ball in the end zone, giving the Mountain Hawks a 10-3 lead.

“We knew coming in that we would have the opportunity to bring the ball down and run if we needed to. That opportunity presented itself, so we were able to take advantage of it and get seven points,” Shoup said.

Q4 14:09 | TOUCHDOWN LEHIGH! What a move by Shoup! Addison Shoup skirts around a defender and takes the ball himself to the house for the 36-yard TD. Lehigh leads, 10-3. Watch: https://t.co/XQHmR4a1zr. #GoLehigh pic.twitter.com/YRP3smvUaf

That was all that Lehigh needed.

After that touchdown early in the 4th quarter, the defense was able to pin their ears back and really pressure Carter the rest of the time. Carter did manage under enormous pressure to thread the needle to keep some drives alive, but the game came down to a late drive and the Warriors needing a touchdown.

“That’s the type of game as a defense that you want to play,” Slater said. “You want it to be on you and you want the game to be in your hands, so to have the whole game come down to us and kind of just getting your feet on the ground and really having to get after it, that’s as much fun as you can have playing football.”

Q4 4:00 | Erik Slater with the sack for Lehigh’s fifth of the day. Watch: https://t.co/XQHmR4a1zr. #GoLehigh pic.twitter.com/PKHw6gEpy2

Merrimack would get no further than the Lehigh 20, with Woetzel and FS Sam McCloskey collapsing on WR Johnny Rosario on 3rd down, then forcing a harmless incompletion on 4th down to end Merrimack’s offensive threat.

“I definitely think we grew in confidence today with the ‘W’ and now we can just roll on,” Woetzel said, “but next game is always the biggest game for us.”