After several weeks of at least one of the undefeated teams going down, Week 9 saw a little more normalcy in the Group of Five. The two remaining undefeated teams left in Appalachian State and SMU remained that way with each picking up wins this week. The Mountaineers won easily at South Alabama in Sun Belt play, while SMU edged Houston on the road.

Of the one-loss teams, Memphis edged Tulsa to set-up a game of the week next week against SMU in a key AAC West Division contest. Navy also in the AAC West remained a huge player in this division with its last second field goal win over Tulane. In the AAC East, UCF remained in the race with its blowout win at Temple. The Knights trail Cincinnati, who was on a bye this week.

Louisiana Tech remained undefeated in C-USA play with its easy win over UTEP. Southern Miss remained with one loss loss behing the Bulldogs in the C-USA West with its win at Rice. The Golden Eagles are joined by the idel UAB Blazers for the top spot in the division.

Western Kentucky was the big upset with its last second loss to Marshall, who now is a half game back of the Hilltoppers. Marshall now has wins over the top two leaders in the C-USA East including FAU also remains in the race with its easy win over Old Dominion.

The MAC is a very topsy turvy league as there actully only two teams (Western Michigan and Central Michigan) with a winning record currently. WMU won easily over Bowling Green, while Central Michigan fell to Buffalo. But the biggest game of the day was Ohio defeating Ball State in pitting two divisional front runners. The Cardinals had been the only undefeated league team coming into the week. With the Ohio win, it remains tied with Miami (OH), who edged Kent State this week.

Boise State is still the frontrunner in the MWC despite losing last week to G5 independent BYU are the lone unbeaten team in league and lead the Mountain Division with three teams with one loss. Utah State suffered its first loss in league play this week to another one-loss team in Air Force, while Wyoming defeated Nevada easily.

San Diego State is the clear leader in the West Division and only have one loss overall and in league play. The Aztecs, however, won a tight game against UNLV as the Rebels missed what would have been a game tying field goal near the end of the game. Hawai’i is the next closest divisional opponent and the Rainbow Warriors defeated New Mexico on the road fairly easily despite giving up a number of points in the game’s final quarter.

Appalachian State as mentioned earlier is one of two undefeated teams in the Group of Five and the Mountaineers are the lone Sun Belt team undefeated in conference play as well. Georgia State and Georgia Southern are right on the heels in the East Division with each with one loss in league play with each picking up home victories this week. The Panthers defeated Troy in a high scoring affair this week, while Georgia Southern stepped out of conference to win easily.

The West Division leaders in Louisiana and Louisiana-Monroe were both off this week. Arkansas State was the one team in the leaders (1/2 game back of the two Louisiana schools) and won easily over Texas State.

Liberty was a Las Vegas favorite in playing at the Big 10’s Rutgers but the Flames could not hold up their end of the bargain. The Flames fell by ten in the contest. As mentioned earlier, UMass, New Mexico State, and Army West Point all fell as well. BYU was off this week. 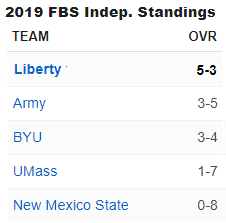