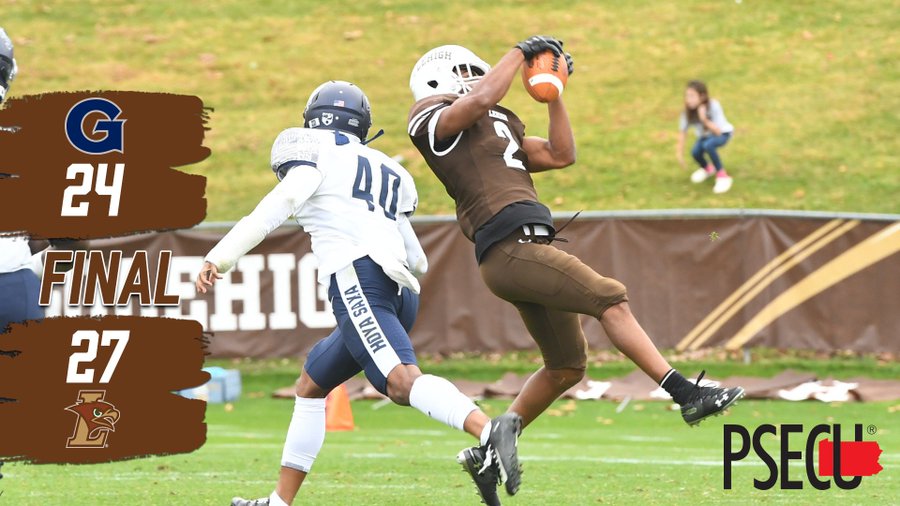 Another week, another nail-biting game with the game in doubt in the closing seconds. Fans of of the Mountain Hawks might have been standing, perhaps cheering, perhaps looking away, unable to watch whether the 27 yard FG goes through the uprights.

In Lehigh’s four-game winning streak after starting out 0-3, each of the Mountain Hawk wins has come either of the walk-off variety or wins in the final minute. Three of them have come on the last play, including the 27 yard game-winner by Henning.

“Consistency is key,” Henning said after the game, trying to describe the game-winner as just another kick. “[As a team,] “we’ve been ready for this mentally, and it’s just good to be able to execute. It’s just like when I first came out for the first point after touchdown. You do the same thing every time.”

Lehigh needed a last-second drive to get in field goal range for Henning after Hoya QB Gunther Johnson hauled a perfect pass to WR Michael Dereus, who scampered in the rest of the way with a 72 yard score. Johnson then found RB Joshua Stakely for a two-point conversion to tie the game with 1:23 left in the game.

Henning got the scoring started with a 36 yarder to put the Mountain Hawks up 3-0 on a 36 yarder. and added to it a 32 yard touchdown run by RB Zaythan Hill to go up 10-0 early.

But then the Hoyas clamped down on defense, holding the Mountain Hawks to 83 total yards in the 2nd and 3rd quarters. That defensive dominance allowed the Hoyas to score 16 unanswered points, with a pretty pass from Johnson to WR Cameron Crayton to make the score 16-10 by the end of the 3rd quarter.

Gunther Johnson would go 20-for-30 passing for 276 yards and 3 TDs in an efficient day passing, but in the fourth quarter, Lehigh’s offensive line made a dramatic turnaround against Georgetown’s tough defensive front.

In the beginning of the fourth quarter, on third and goal from the 14 yard line, QB Tyler Monaco found RB Nate Hope underneath, as he was stopped about a half yard short of the gola line. Rather than kick a field goal on fourth down, head coach Tom Gilmore elected to go for it, calling Hope’s name once again as he followed a tremendous block on the right side to burst into the end zone, which gave Lehigh a 17-16 lead.

After a Lehigh defensive 3-and-out, the Mountain Hawks relied on Zaythan Hill and Nate Hope again during a 15 play, 73 yard drive that you make an Army or Navy fan proud. Hope, who had 71 tough all purpose yards on the day, put in for his second touchdown on the day to make it 24-16.

“It was amazing, ” Hope said after the game. “We know that we have four or five backs that can go out all time, and the O line has been playing amazing these past few weeks and we’ve just been having great weeks of practice, and it showed up today. We know we have a lot of playmakers, on the outside, in the backfield, quarterback. Everybody’s a playmaker. And we just had to find a way to come together as a team. And that’s what we’ve been doing.”

Even though it was another cardiac win for the Mountain Hawks, head coach Tom Gilmore has been impressed with the resiliency of his team the last three weeks.

“Theykeep fighting to the end,” Gilmore said. “It’s something I think every coach preaches, but I’m not so sure it happens as much as it’s been happening for us, four weeks in a row. But even before the last four weeks, we kept saying that same thing the first three weeks of the season [when Lehigh went 0-3].

“Then, I’m not so sure many people believed what we were saying. But we saw the improvement. We still have a lot of improvements to make – I think every player, every coach can tell you that. But the kids keep coming and working hard every week. And they keep coming to work. They keep fighting. It was an amazing finish.”