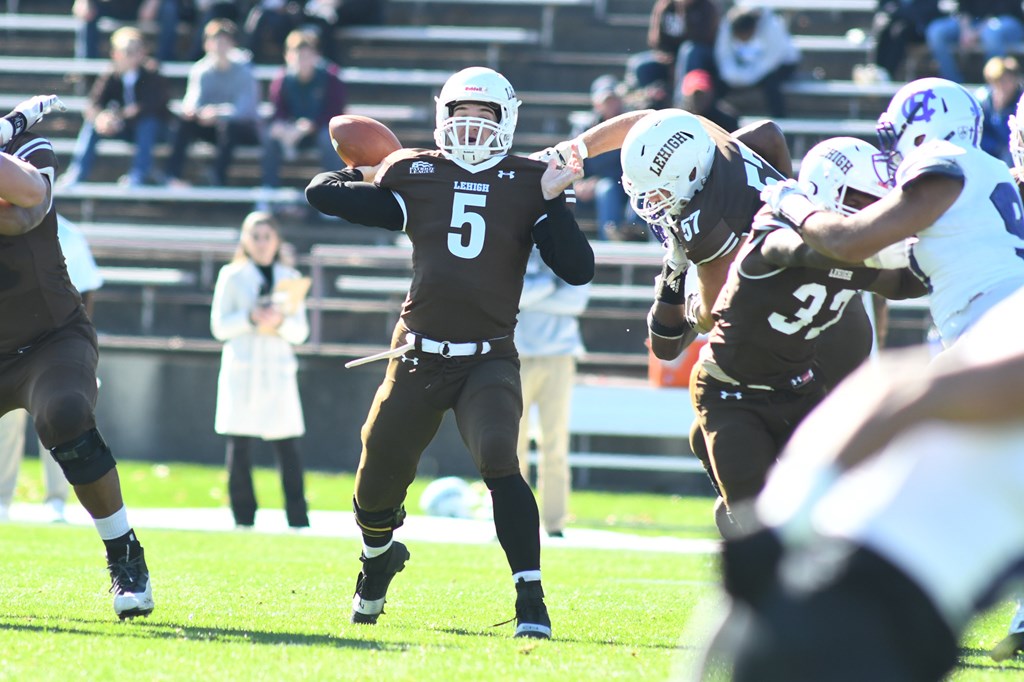 All week, the Lehigh football players were using last year’s game versus Holy Cross as motivation.

Then-head coach Andy Coen didn’t mince words on the radio after last seasons 56-0 shutout loss to the Crusaders. “This is an embarrassment. We didn’t do anything right,” he said in a game where his team was held to 203 yards of total offense, turned the ball over four times, and went 0-3 in Patriot League play for the first time in program history. Holy Cross RB Domenic Cozier had the game of a lifetime, amassing 208 of Holy Cross’ 405 rushing yards and scoring one of the Crusaders’ eight touchdowns on theing homecoming afternoon.

Lots of the talk going into this week was the Shakespearean drama that seemed to surround this game in terms of the head coaches. Lehigh’s Tom Gilmore was Holy Cross’ head coach for 14 years before ultimately returning to South Mountain, where he was once defensive coordinator. Holy Cross’ Bob Chesney was the first full-time head coach that was hired after Tom Gilmore was ousted mid-season in 2017.

But for the players of both programs, it was less about that and much more about demonstrating how much they had improved over that battle of 1-6 teams on a wet, rainy, homecoming game a year ago in Worcester. Both teams showed exactly how much more they were than those teams with losing records last year, and in the end, Holy Cross showed that they were one play better than the Mountain Hawks on this afternoon. Just like last season’s game, Holy Cross RB Domenic Cozier once again had a career day against the Brown and White.

On Holy Cross’ second drive of the game, the speedy Cozier burst through the offensive line for an 88 yard run that set up the Crusaders in the Lehigh red zone and led to QB Connor Degenhardt sneaking in the ball at the 1 for Holy Cross’ first score.

He was also instrumental after Holy Cross set up at the Lehigh 31 after a punt catch interference call as well. He’d gain 28 yards on the ground to get to the Lehigh 3, then yielded to RB Peter Oliver for a short 2 yard touchdown plunge.

“It was frustrating,” senior LB Riley O’Neil said. “We have to focus on staying more consistent as a defense and taking it a play at a time. You have to consistently do your job and get more guys free. Big plays like sacks always help.”

Though he didn’t find the end zone, Cozier’s slashing running set up Holy Cross on plenty of first half drives. He’d end with 190 yards, averaging more than 8 yards per carry.

“I was really frustrated because the two biggest plays in the first half that we allowed defensively were very, very easily solved,” Gilmore said afterwards. “We’ve just got to make sure that we’re communicating things with the players. Some of those things are hard to replicate in practice.”

After closing the deficit to 14-7, would score 10 unanswered points in the second and third quarters with a 37 yard field goal by PK Derek Ng and a spectacular touchdown grab by WR Tenio Ayeni to give the Crusaders a 3 score lead.

Slowly, however the Mountain Hawks showed that they were different than the team that packed it in last year in Worcester. Senior LB Riley O’Neil, who had 8 solo tackles on the afternoon, led a defense that started to chip away.

With Holy Cross pinned deep in their own territory, Lehigh LB Keith Woetzel hurried Degenhardt on a pass attempt and LB Pete Haffner came down with a terrific interception, his second on the day, to give the Mountain Hawks some badly-needed momentum.

“He’s been great for us,” O’Neil said of Haffner. “He’s a great leader on and off the field. That was a big-time play to force the turnover.”

Two plays later, the offense would feed off that momentum, with QB Tyler Monaco finding WR Dev Bibbens for a big 33 yard scoring drive to get the Mountain Hawks closer.

With a bit of momentum, Bibbens and WR Jorge Portorreal showed a lot of their grit, converting third downs and keeping drives alive. Though Holy Cross’ defense stood fast in the fourth quarter, getting four sacks, including one by freshman LB Jacob Dobbs, Monaco would repeated somehow fine Portorreal and Bibbens to extend drives, cutting the deficit to one score after a 38 yard FG by PK Austin Henning.

“I don’t think we really worry about the scoreboard,” Bibbens said. “The receiver group, we pride ourselves on making plays when they come to us. They don’t come through to us every play. But when they do come, you have to make your play in the field. We did a pretty good job, but not enough to win. We have to get back in the film room, fix those mistakes, and got back for next week.”

Lehigh would get the ball back with 2:48 left in the game with a chance to tie the game late. Starting at their own 21, they would rely on RB Rashawn Allen, who gutted out some tough yards on the ground, to kickstart their final drive. Monaco would then also find Bibbens and Portorreal again as they drove down the field.

But they Holy Cross DB Chris Riley would seal the deal for the Crusaders.

🏈 Domenic Cozier ran for 190 yards and Chris Riley made the big defensive play at the end to keep @HCrossFB undefeated in @PatriotLeagueFB. #PatriotFB @Stadium @NCAA_FCS pic.twitter.com/tECDZGmX91

“We knew they had to throw the ball. I just got as deep as I possible and tried to read the quarterback’s eyes. Then I just went up and made a play,” Riley said as he nabbed his fourth interception on the season.

With the win, the Crusaders went to 5-4 on the season, but most critically 3-0 in Patriot League play, while Lehigh fell to 4-4 and 2-1 in league contests. Holy Cross is now in the driver’s seat for the Patriot League title – if they keep winning, they’ll earn the Patriot League’s autobid to the FCS playoffs.

Not bad for a team that was 2-6 at this point last season.

Similarly for Lehigh, they’ve already eclipsed their win total of last season, and are poised to end the year on a high note. But the frustration still bubbles from being so close to being able to upset Holy Cross.

“I think lack of consistency sealed our fate,” Gilmore said. “It’s not an ideal situation. We slowly chipped away at the end, though and we didn’t let it get us down. And we had the ball. We just didn’t make the plays at the end this time to pull it out.”