To Colgate fans, Lehigh is returning to the scene of the crime this weekend.

That’s because the Raiders’ last Patriot League conference loss came to Lehigh on their home field, Andy Kerr Stadium, two years ago back on October 7th, 2017.

Not many people picked Lehigh, who was entering that game 0-5, to upset Colgate, who was 2-3 and fresh off a 21-7 win over their Chenango Valley archrivals, Cornell.

But that’s exactly what Lehigh did, winning on a last-minute drive thanks to a looping 35 yard pass from QB Brad Mayes to WR Troy Pelletier and a late forced fumble, recovered by Lehigh, to pull off the upset.

It was a controversial game, with three different touchdowns taken off the board for Colgate. But as befitting this game between Patriot League rivals, it seemed to set the stage for the next couple of years.

In 2017, Lehigh would win the Patriot League Championship, with the Colgate game the spark that allowed the Mountain Hawks to go 5-1 after their 0-5 start and win the title and Patriot League Autobid.

Yet the bitter disappointment from that loss seemed to propel Colgate, too. They would finish the rest of the 2017 season without a loss – finishing at 7-4 and technically co-champions with Lehigh – and wouldn’t lose again until November of 2018, losing to a bowl-bound Army-West Point team by a very respectable 28-14 score.

Lehigh and Colgate are not arch-rivals. But their rivalry – with a little r – is still one of the hidden gems of the Patriot League 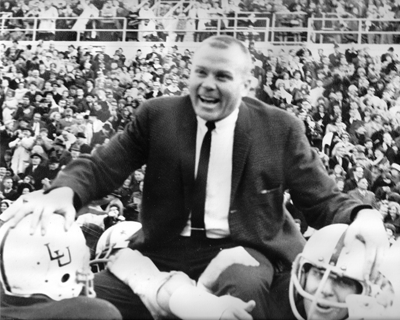 Rivalry with a little r

From the very beginnings of their programs in the 1800s, Lehigh had Lafayette. In similar fashion, Colgate had Cornell as their arch-enemy. It would take a while before Lehigh and Colgate would finally get going on the rivalry front.

Though they played once in 1922, the Raiders and Engineers started a long-standing series in 1960, when both schools were independents.

Soon after starting their series Fred Dunlap, a former Colgate player, took over as Lehigh’s head coach in 1965. The Engineers, as they were then known, were in a lean period until Dunlap built Lehigh into a Division II contender by the early 1970s.

In the early 70s, Dunlap led Lehigh to three wins over his former alma mater, and Colgate noticed, especially after a 38-6 thrashing in 1975. Colgate hired Dunlap in time for the 1976 season for their Division I football program. He was 77-49-3 as Red Raider head coach.

In a way, the story of Fred Dunlap explains how there is a rivalry between the two schools. Colgate and Lehigh very frequently are recruiting the same football players (and, sometimes, coaches). It adds fuel to the players and brings out that extra level of emotion.

(You can read more about Fred Dunlap’s extraordinary life in the book Dunlap Rules.)

When the Patriot League was formed in football in 1986, Lehigh and Colgate we founders, further cementing the fact that their rivalry on the gridiron would continue as league games. That took a friendly rivalry and turned it into a league game every year, cranking up the stakes. There have been more than one time when the game between Lehigh and Colgate was considered the de facto “Patriot League Championship Game”.

In a testimony to how competitive the two teams have been, Colgate holds a slender 30-24-2 edge in the series, with a great many of the matchups having Patriot League title considerations. In the last five years, Lehigh won the league’s automatic bid to the playoffs twice, and Colgate has won it three times.

Despite Colgate’s 0-5 record and Lehigh’s 1-3 tally, both the Raiders and Mountain Hawks go into this game firmly believing that a win in this game can propel them to success in Patriot League play.

However, both teams have big questions to answer on offense.

Historically, one aspect of the Colgate/Lehigh rivalry has been a contrast of offensive styles. Colgate has run the spread read-option for more than two decades, first under head coach Dick Biddle and currently under head coach Dan Hunt, now in his sixth season coaching the Raiders. And Lehigh for an equally long period has sported the nickname “Air Lehigh” for their precision passing game and all-American wideouts.

The Raiders, who have played one of the toughest FCS schedules in the country, had a huge setback when QB Grant Breneman got injured in the first couple of series against William and Mary. On the Colgate depth chart, Breneman, QB Jake Froschauer (who started for the Raiders) and QB Noah Rothman are listed as the possible starters.

Early word is that Breneman would be well enough to start on Saturday, but it’s likely we won’t know until Colgate takes the field at Andy Kerr Stadium at 1:00 PM this Saturday.

Lehigh, too, has questions at quarterback as well.

Last week, QB Tyler Monaco and QB Addison Shoup both spent time in the shotgun, throwing two interceptions apiece. Shoup’s touchdown scamper in the 4th quarter was Lehigh’s only touchdown of the game giving the Mountain Hawks a 10-3 victory over Merrimack.

“Both did some good things and both came up short in some ways against Merrimack,” Lehigh head coach Tom Gilmore said this week. “They’re both getting a lot of reps and we’re alternating who’s getting what on each day to make it more competitive. It brings the best out of both of them.”

Like Colgate, Lehigh won’t be announcing who takes the field first at quarterback until 1:00 PM either.

Despite the different styles, both head coaches are saying similar things about their teams – about the need to be more consistent and play cleaner football.

“While there are some positives, we’ve got to clean up the ways we’re still beating ourselves,”Colgate head coach Dan Hunt said after losing to Maine. “We’re going to look at the film, see who played well and see what we need to do. But overall, considering at times who we had out there, the fight was there and that was the step we talked about making.”

The team that finds their quarterback first, and the one the cleans up the most mistakes, will probably end up winning a lot more than a single football game in October. It could be a win in a rivalry game that propels a team towards a championship.