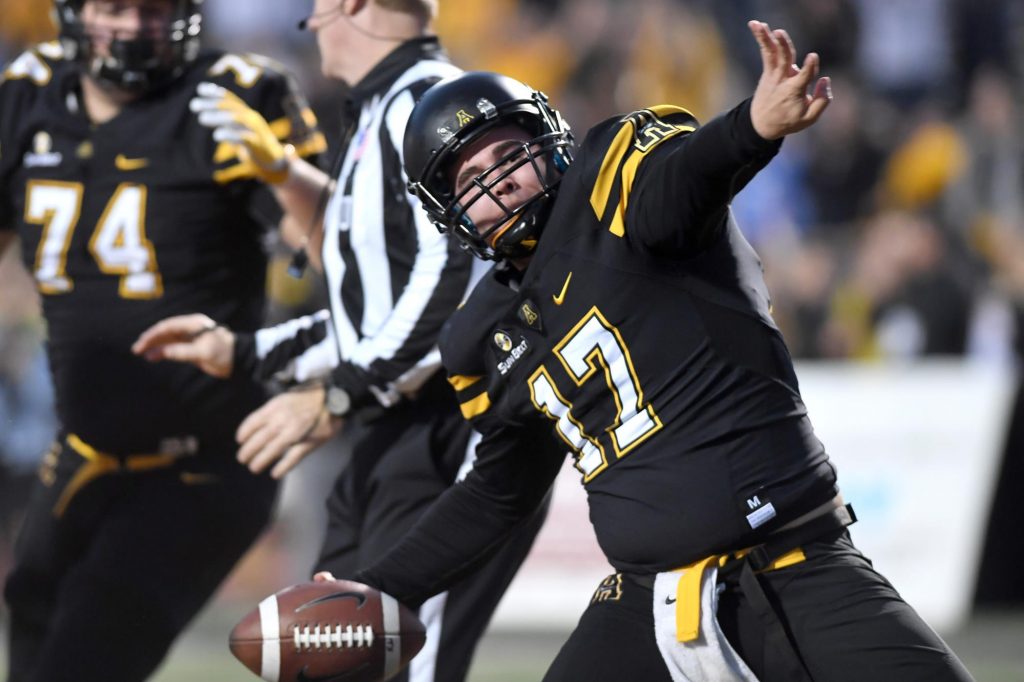 BOONE, N.C. — For any college football player, it is the ultimate fantasy — scoring a touchdown on your senior day. But for rarely-used Appalachian State quarterback Curtis Fitch, his highlight moment in his first game of the season went beyond his wildest dreams.

Fitch was summoned from his normal game-day duties of signaling in plays to enter the contest on Saturday afternoon between Appalachian State and Louisiana-Lafayette with about four minutes remaining in a 56-14 contest.

As he sprinted up the sideline to find his seldom-used helmet, Fitch’s teammates and friends in the stands began to roar their approval.

On fourth and three from the ULL 18, third-string quarterback Jacob Huesman completed a pass to freshman Jalen Virgil for nine yards to keep the drive alive and allow Fitch a chance to play.

Ironically, the official stats for the game credited Fitch with the completion, which would have been the only one of his college career.

With Fitch still adjusting his head gear, Huesman handed off one more time to freshman tailback Daetrich Harrington for two yards and Fitch sprinted onto the field amidst more cheers.

Watching from a grassy knoll nearby, this writer knew instinctively what was coming next. In a similar situation the week before at Georgia State, starting quarterback Taylor Lamb had executed a bootleg, with Lamb scoring a game-clinching touchdown in the 31-10 victory.

And sure enough, Fitch faked the ball to Harrington, did a reverse pivot and raced for the end-zone pylon, near the App State bench. But Ragin’ Cajun roverback Tracy Walker wasn’t fooled and cleaned Fitch’s clock at the three after a four-yard gain.

The wobbly 6-foot-tall, 195-pound quarterback turned his left ankle on the run and hobbled back to the huddle.

“That’s the first time Curtis has been hit in four years,” said fellow quarterback and best friend Zeb Speir, noting that even in practices and scrimmages, quarterbacks wear red jerseys to signify they are not to be tackled.

Coach Scott Satterfield signaled for a time out to give Fitch a few more moments to regroup and then called another running play for Harrington, who was swept out of bounds at the two. It was now fourth down and Fitch had one last chance to create a memory.

“I remember some of the guys telling Daetrich ‘Don’t score, don’t score.’ They wanted Fitch to score,” Satterfield explained.

What happened next was startling for Mountaineer fans, as ASU’s fourth quarterback of the day took a snap from under center for the first time since the spread formation was adopted during the 2004 season. Satterfield had called for a quarterback sneak — a play that the Mountaineers haven’t had in their playbook since 2003.

With additional blocking strength added to the lineup with tight ends Collin Reed and Bill Cecil lining up in the backfield, Fitch surged forward and was pushed from behind by Cecil and Reed into the end zone. 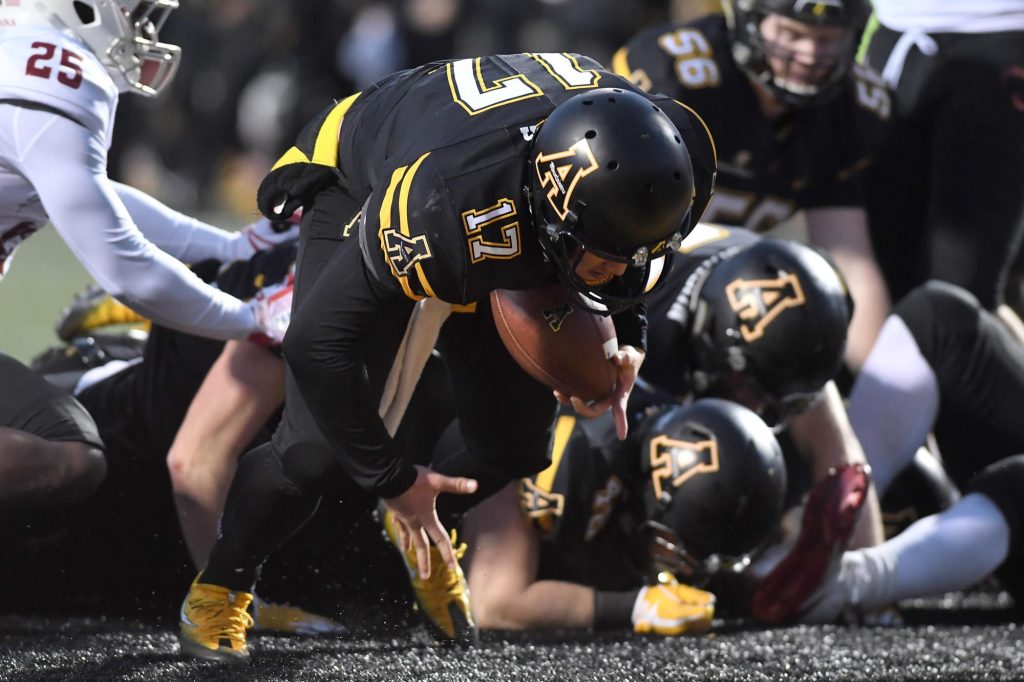 “It was unbelievable — how about that?” Fitch said after the game. “It was awesome and really special. It shows the culture of this program and the kind of team we have, the kind of coaches we have.”

Fitch leaped to his feet and rifled the ball against the temporary stands behind the end zone, immediately drawing a penalty flag from Sun Belt Conference field judge Jonathon Middlebrooks, who was clueless to the significance of what was unfolding and charged Fitch with unsportsmanlike conduct for excessive celebration.

If ever there was a moment for excessive celebration by a player, it was this one, which finished off the Mountaineers’ 63-14 victory and a share of their second straight Sun Belt title.

Appalachian State radio broadcaster Adam Witten responded with classic understatement, harkening back to the 2002 Josh Jeffries/Derrick Black two-point defensive conversion that beat Furman 16-15 and Mountaineer fans remember as “The Miracle on the Mountain.” 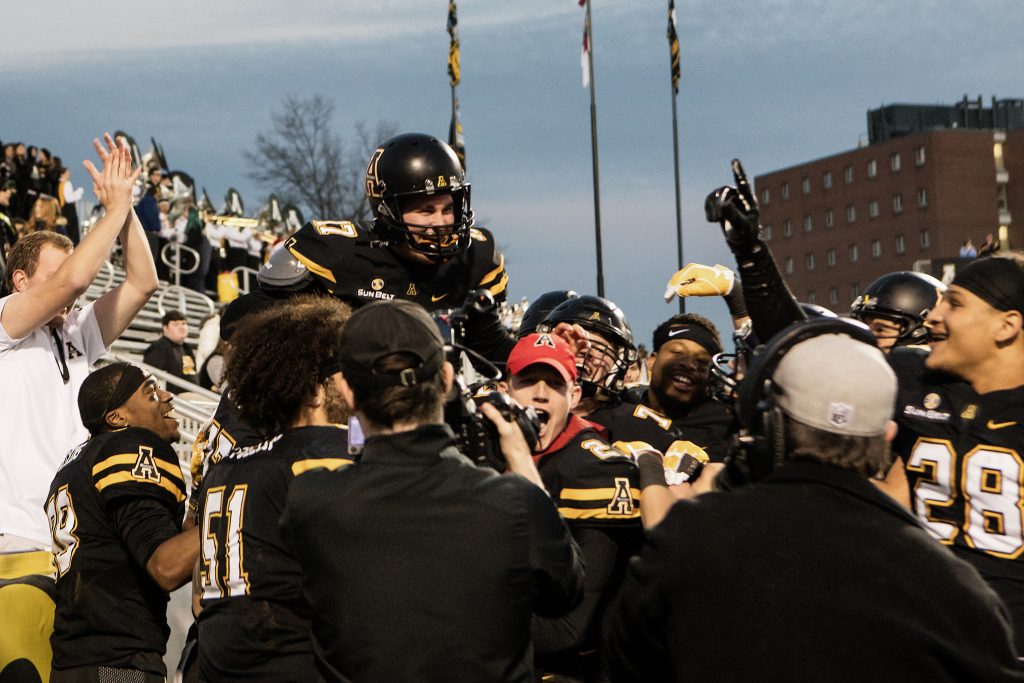 Several other penalty flags followed when nearly the entire Mountaineer team streamed into the end zone to greet Fitch.

Speir, Reed, offensive lineman Chandler Greer and others raised Fitch to their shoulders briefly before his feet returned to earth and he scampered, excitedly back to the Appalachian sideline, where he received big hugs from his coach, Scott Satterfield, and others.

“Fitch was taking the under-center snap and my mindset was, if he catches the snap from center, he’s going to score, because they’ll push him in,” Lamb said. “As soon as he caught the snap, I sprinted. I was gone. I had tears in my eyes. Me and Zeb were out there first. I was not sure what to do, because Curtis Fitch scored a touchdown in a college football game.”

The emotional Lamb, an all-conference passer, who set several ASU and Sun Belt records during his four years as a starter, said Fitch’s touchdown sneak was the most memorable moment of his career.

Watching the events unfold from the ESPN television booth at the top of Kidd Brewer Stadium, longtime coach and now color analyst Watson Brown summed up the scene for the TV audience.

“Sometimes, it’s not the wins and losses, it’s the little things, like where you see relationships with kids, the excitement when something good happens to them,” Brown said. “That’s the neat stuff about college football.” 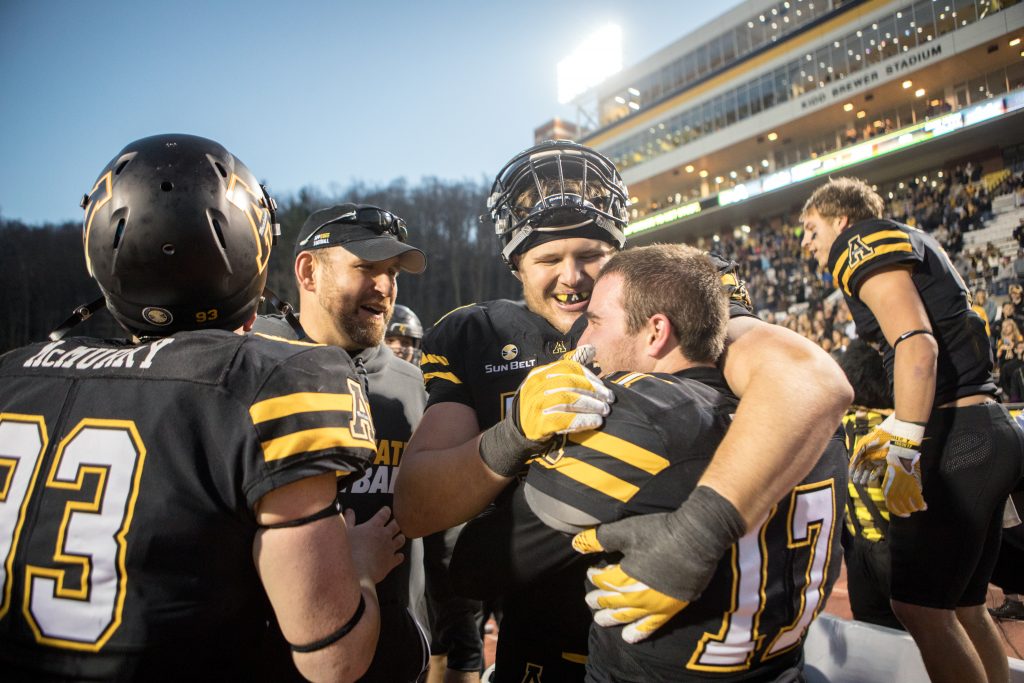 In a week where the absurd had grabbed the college football headlines (case in point, the Tennessee coaching search), this one moment in a blowout game showed us the beauty of the college game.

Fitch’s story is a unique one. He is one of three quarterbacks on the Appalachian roster who are the sons of college coaches, each one with the aspiration of themselves coaching at the university level.

Lamb’s father, Bobby, was the longtime coach at his alma mater, Furman, and is now the coach at Mercer. Speir’s dad served as an assistant at Western Carolina and Elon before joining Jerry Moore’s staff at ASU and worked as the recruiting coordinator when the Mountaineers won three consecutive FCS national championships from 2005-07. Mark Speir returned to Western Carolina as the head coach.

Fitch came to App State looking for a football education to go along with his Dean’s List-level work as a Business Management major. It will be mission accomplished on both fronts when he picks up his Bachelor’s degree next weekend during Fall Commencement.

He will be at the American Football Coaches Association convention in Charlotte next month, trying to secure a position as a graduate assistant in a college football program.

Even though he is listed as a redshirt junior and technically has one year of NCAA eligibility remaining, Fitch — a one-time walk-on who only earned a scholarship this fall — was one of 19 seniors recognized during senior day celebrations on Saturday.

Fitch received a handful of scholarship offers from smaller schools, but decided to walk on at Appalachian after taking a visit to the pristine, mountain locale.

“I came up here and fell in love with the campus,” Fitch said.

And even though most students and faculty members didn’t even know he was on the roster, Fitch was quick to make friends of those he did meet and those who witnessed his tremendous work ethic.

“I met him the first day I was up here (for college),” said Speir, who had spent his formative years at Appalachian practices and games with his father coaching at ASU. “We were both in the same shoes.”

The two quarterbacks became fast friends, as they also did with Lamb, forming a Three Musketeers-like alliance.

“There is no one that doesn’t like Curtis,” Speir explained. “Curtis is a very humble guy. He always puts other guys first.”

The touchdown on Saturday put Fitch into another orbit this week as he was suddenly the center of much attention, doing several interviews and appearing with Cecil on Tuesday’s weekly Mountain Talk radio broadcast at Cafe Portofino’s.

“It’s been a complete 180,” said Fitch, whose only previous playing action was for the final three plays of a 49-3 victory at Old Dominion in 2015. “People didn’t know last week at this time that I was on the team.”

And now Fitch has completed a senior day moment that App State fans will remember for the ages.

“Four years of hard work, to be rewarded like this is so special,” Fitch said.