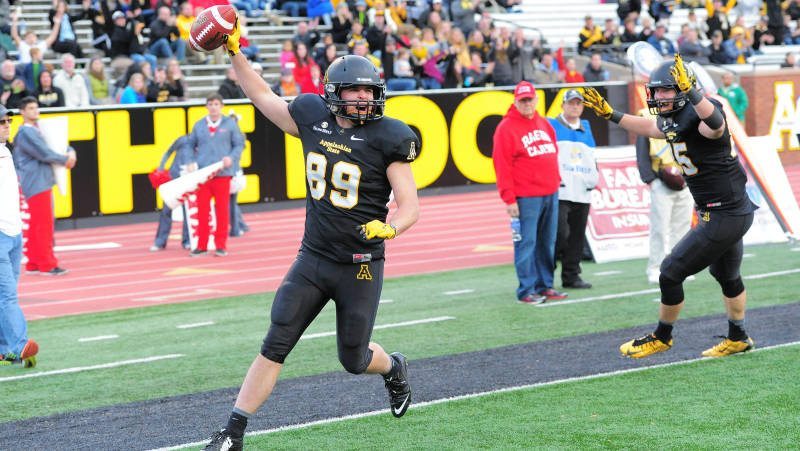 BOONE, N.C. — For the first two plays Saturday afternoon, things couldn’t have gone better for the Louisiana Ragin’ Cajuns in their battle for football bowl eligibility against first-place Appalachian State.

Starting quarterback Jordan Davis scrambled for a season-long 47 yards on first down and then fired a 28-yard scoring strike to senior Devin Scott on the next snap. But from there, playing in the 3,333-foot elevation of Kidd Brewer Stadium on ASU’s senior day, things wen downhill rapidly as the Mountaineers pounded out their 63-14 win.

Suffering through two interceptions, one lost fumble and an ill-advised fake punt in the first half, ULL was scorched for 56 straight points in a contest that was basically decided by halftime. Three touchdown connections between senior quarterback Taylor Lamb and freshman receiver Thomas Hennigan in the second period turned the 14-7 Appalachian lead into a 35-7 rout.

That duo combined for another TD less than four minutes into the third period as Hennigan took advantage of a secondary lapse for 42 yards and a 42-7 advantage. Hennigan also had his 73-yard punt return for a score later in the third period wiped out by a fair catch signal.

The victory earned the Mountaineers (8-4, 7-1) a share of their second straight Sun Belt Conference title. The loss ended the season for the Ragin’ Cajuns (5-7, 4-4), clinched ULL’s third consecutive losing season and intensified speculation on the employment status of coach Mark Hudspeth.

Sources from ULL said a decision on Hudspeth’s future after seven years heading the Ragin’ Cajun program could come as early as Sunday.

“I don’t control any of that,” Hudspeth said in his postgame press conference. “It will be up to (the ULL administration). Whatever they decide, it’s been a fun seven years.”

After scoring quickly, the Ragin’ Cajun defense stopped Appalachian on a fourth and one play from the ULL 37 when Tracy Walker and Corey Turner crushed ASU receiver Ike Lewis for a two-yard loss. But the Ragin’ Cajuns allowed touchdowns on nine of the next 10 Mountaineer possessions.

Lamb, a four-year starter, was a brilliant 17-of-22 for 242 yards and four TDs in his final home game. Hennigan grabbed five catches — four on scoring plays — for 99 yards.

If that wasn’t enough, 2016 Sun Belt offensive player of the year Jalen Moore slashed the ULL run defense for 110 yards and two scores on 17 carries before giving way to freshman Daetrich Harrington in the second half. Harrington added 17 attempts for 118 yards one more TD.

In all, App State piled up 608 yards of total offense, 357 on the ground. ULL, meanwhile, had 369 yards, but less than half of the production of the Mountaineers on the ground (162 yards).

“They made a lot of plays and we didn’t play as well as we could have,” said Hudspeth. “Anytime you lose the turnover battle 3-0, that’s not a good recipe.”

Saturday’s game was a contrast of teams heading in opposite directions. The Mountaineers will find out on Sunday where they will play in their third straight bowl appearance, while ULL has gone from from four bowl bids in Hudspeth’s first four seasons to one bowl selection in the past three years.

“When we came into the Sun Belt, Louisiana and Arkansas State were the teams we said we had to beat,” Appalachian coach Scott Satterfield said. “This business, we’ve seen the craziness. When you win, you’ve got to celebrate those wins, you have to celebrate those championships. It’s hard to maintain championship-caliber teams.”