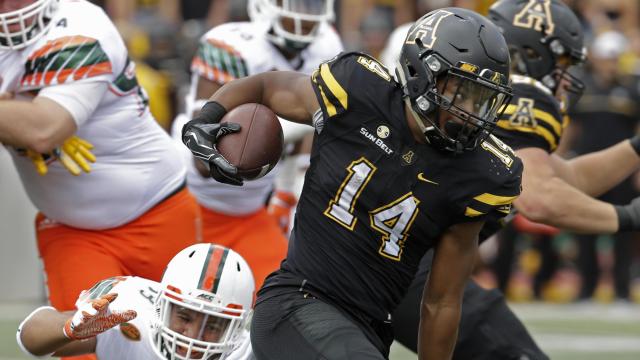 BOONE, N.C. — Appalachian State knew heading into the 2016 college football season that it would be facing the toughest non-conference schedule in its history.

And while the Mountaineers have slogged through the most difficult part of that journey with differing levels of success — from the missed opportunity of an overtime loss at Tennessee, a solid, though inconsistent win over Old Dominion and last week’s disappointing blowout defeat against Miami at home — there is one more challenge ahead on Saturday.

ASU (1-2) travels to Akron for a 3:30 p.m. game on Saturday to face another team with high expectations, but uneven results thus far.

“We knew all four non-conference games were going to be tough,” App State coach Scott Satterfield said. “We have one of the toughest non-conference schedules among all of the Group of Five schools.”

If the Zips didn’t have Appalachian’s attention before, they grabbed it with full force last Saturday when Akron dispatched old Mountaineer rival Marshall, 65-38. It was the most points that the Thundering Herd had ever allow at Joan C. Edwards Stadium.

“You put up 60 in Marshall’s stadium?” Satterfield asked.

This former App State quarterback obviously remembers that he had directed his Southern Conference championship team to just a field goal and a touchdown during a 10-3 victory in 1995 and that Satterfield had witnessed a Marshall shutout in the only other game he played there in 1993.

Akron may not be a household name among most college football fans, but the Zips do have a pair of names that those in the southeast will remember — head coach Terry Bowden and defensive coordinator Chuck Amato.

Bowden, of course, is the son of former Florida State and West Virginia coaching legend Bobby Bowden, and his 23 years running a program include a stop at Auburn.

Together, Bowden and Amato have led a talent infusion into the Zip program that has Akron in position to compete for a Mid-American Conference title this season after the team went 8-5 and won its first bowl game last season in the squad’s Football Bowl Subdivision history.

“Last year, they had the No. 1 defense in the MAC,” Satterfield said. This season, “they are trying to find 11 people they can believe in.”

Don’t be surprised to see the Mountaineers attack the Zips with option running, while also trying to polish up things in what has been a lackluster passing game thus far.

“This is the biggest game of the year for us,” ASU quarterback Taylor Lamb said. “We need to get our record back to .500. It’s just a matter of getting our confidence back.”

An inexperienced receiving group has struggled with running proper routes, dropping passes and getting open in the first three games, but Lamb put more blame on himself.

“I’ve got to play a lot better to help those guys,” Lamb explained.

Lamb may have to do it without the help of one of App State’s all-time leading rushers, senior tailback Marcus Cox. Cox appeared to injury his left quadriceps on a 79-yard touchdown run against Miami that was questionably called back on a holding penalty and has been going around campus on crutches this week.

In his place, the Mountaineers will rely on sophomore Jalin Moore, who finally broke out for 89 yards rushing against Miami after back-to-back poor performances against Tennessee and Old Dominion. Moore rushed for 528 yards last year as Cox’s backup.

On offense, the Zips have put their faith in strong-armed, junior quarterback Thomas Woodson, a third-year starter who has thrown for 786 yards in Akron’s two wins this season. Woodson was held to just 108 yards in a 54-10 loss to Wisconsin.

The Zips have also been helped in the running game by ex-Ohio State rusher Warren Ball — a 6-foot-1, 223-pound grinder.

“They are attacking the ball down the field as much as anybody in the country,” said Satterfield.

“It just goes back to the basics,” said junior cornerback Mondo Williams. “We’re still the same team and the same guys” that helped ASU field one of the top defenses in the country last season.