The drama continues, as usual, in the Ohio Valley Conference.

While many automatic bids for the FCS playoffs were determined over the weekend, the OVC chose to extend the suspense a tad bit longer.

But as the dust settled on Saturday’s games not much changed. All that remains to be seen is who emerges as OVC champions in 2019.

Austin Peay, and the rest of Clarksville, Tenn., is ready to celebrate like its 1977.

The Governors and rival Southeast Missouri, which defeated Eastern Illinois 28-12 on Saturday, remained atop the league standings and are 6-1 in league play heading into this weekend’s regular-season finales.

All AP has to do is win at home against Eastern Kentucky and the title will end a 42-year drought and return to Clarksville for the first time since 1997.

A loss, coupled with a SEMO win would give the title, and the automatic bid to the Redhawks. If the two teams remain tied for the lead, the bid would go to the Governors by virtue of their 28-24 win over SEMO earlier this year. 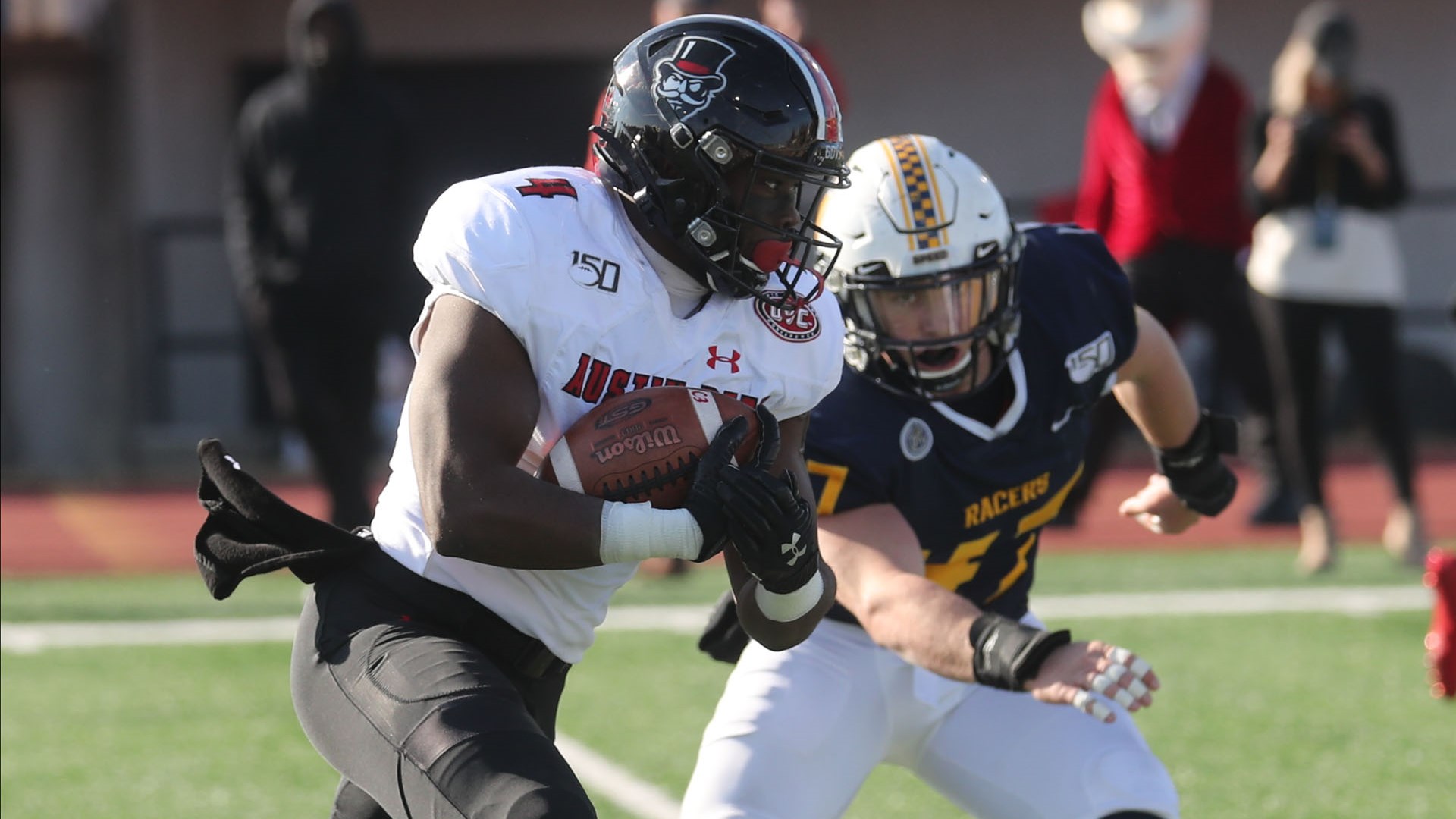 JaVaughn Craig and DeAngelo Wilson etched their names into the record book and Prince Momodu ran for a pair of touchdowns as Austin Peay took one step closer to its first Ohio Valley Conference championship in more than 40 years with an impressive 42-7 win over Austin Peay on Saturday.

Whatever hopes the Racers had of scoring the upset evaporated quickly in the final period. Austin Peay scored three touchdowns in rapid succession that saw the Govs’ lead grow from 21-7 to the final count on the scoreboard. The three scores came in a span of 6:59 to close the door on MSU.

Wilson started that game-clinching spree with an eight-yard pass from Craig with 13:04 left in the game. Ahmaad Tanner ran in from seven yards out less than five minutes later as the Govs increased their lead to 35-7 with 8:28 to go.

Kordell Jackson put a cap on the scoring when he recovered an MSU fumble and returned it two yards for a touchdown of his own and AP was in front 42-7 with just over six minutes left in the game.

The Governors wasted little time in setting the tone against the Racers. The visitors took the opening kickoff and methodically marched down the field and capped a 75-yard drive on a one-yard burst from Momodu with 10:34 left in the opening period. The drive took 10 plays to reach its climax.

They would extend the advantage in the second quarter when Craig threw his first scoring pass of the game to Wilson. The play covered 40 yards and Logan Birchfield’s second PAT in as many attempts put the Govs in front 14-0 with 9:48 left before halftime.

The two teams played on even terms in the third quarter. Austin Peay managed to extend its lead to 21-0 early in the second half when Momodu for the second time in the game with a 10-yard burst and Birchfield’s conversion kick put the Governors in front 21-0 at the 9:31 mark of the period.

Murray State would not go away without some noise.

QB Preston Rice connected with Johnathan Moss for a 27-yard scoring pass to put the Racers on the board with 3:35 left to go in the quarter. It proved to be the only points of the game for Rice and the Racers.

Craig accounted for 183 yards of total offense in the game to pace the Govs. He completed 11 of 23 passes for 136 and the two scoring passes. He was intercepted twice on the afternoon. Craig added 47 yards on 10 rushes.

Wilson finished the day with six catches for 92 yards to lead the Governors in that department.

Momodu led the way on the ground with 15 carries for 93 yards, while Turner finished the day with 60 yards on 14 carries for the Govs.

The Austin Peay defense did its job on the day as the Racers could only manage 268 yards of total offense, including just 39 yards on the ground on 34 carries (1.1 ypc). The AP defense recorded 11 tackles for loss, including five sacks (-44 yards) on the day to help in the victory.

Cory Thomas carried the five times for 36 yards to lead the ground attack for MSU.

Rice completed 18 of 38 passes for 229 yards on the day. He was also intercepted twice by the AP defense. Southeast Missouri’s perch atop the OVC standings remains intact – but it took some second-half heroics to save the day for the Redhawks.

Sharbari Davis returned a punt 46 yards for a touchdown early in the second half that gave SEMO the lead for good, while teammates Daniel Santacaterina and Mark Robinson scored rushing touchdowns in the fourth quarter to seal the 26-12 win against a stubborn Eastern Illinois team.

It was SEMO’s first win at EIU since 2010. The win also assured the Redhawks of back-to-back eight-win seasons for the first time in school history.

Davis’ electrifying special teams play allowed SEMO to take a 13-7 lead with 13:03 to play in the third quarter. Santacaterina added to that lead when he ran in from one yard out with 13:41 left in the game. The score would remain that way until Robinson scampered in from 16 yards out at the 4:47 mark. The conversation kick from Kendrick Tiller and was and Corneliuss Page returned it for the defensive PAT to give EIU its final two points of the game.

The Panthers grabbed an early 7-0 lead in the game when Harry Woodbery connected with Isaiah Hill from 26 yards out with 5:39 remaining in the opening period of play. Tiller booted field goals of 34 and 32 yards in the second period as the Redhawks closed to within 7-6 at the intermission.

Santacaterina finished the game with 139 yards after completing 16 of his 27 pass attempts against one interception. He also rushed eight times for 25 yards in the game. Robinson led the way on the ground with 77 yards on 13 carries. The Redhawks managed just 145 rushing yards in the game.

Standout receiver Kristian Wilkerson was contained for most of the day by the EIU secondary. Wilkerson managed to catch just four passes for 56 yards, while Aaron Alston added 42 yards on six receptions.

Woodbery completed six of nine passes in the game for 118 yards. Jonah O’Brien and Jaylon Banks also recorded pass attempts in the game. O’Brien completed 12 of 21 passes for 84 yards, while Banks added five yards on three of seven passing. The Panthers finished the day with 207 aerial yards on the afternoon.

Jaelin Benefield (13 carries) and Darshon McCullough (11 carries) both rushed for 27 yards to lead EIU in that department. Hill finished the day with an impressive 152 receiving yards after catching 13 passes.

John Bachus tossed three touchdown passes, including one in the pivotal fourth quarter and Jaimiee Bowe scored a pair of touchdowns, as UT Martin rallied to defeat Tennessee State 28-17 on Saturday.

The win was the final OVC game of the season for the Skyhawks, who improved to 6-2 in conference play with the triumph. UT Martin plays at Kentucky next week.

The Skyhawks trailed 17-14 at the start of the final 15 minutes of play, but took advantage of a short field before Bachus connected with Terry Williams on a nine-yard pass with 7:17 remaining in the game to put UT Martin in front 21-17. The play capped a 30-yard drive that took just three plays following a TSU punt.

Jaimiee Bowe put the finishing touches on the comeback win with a five-run scoring run with just 51 seconds remaining in the game. That drive covered 16 yards after the Skyhawk defense held on downs and setting the stage for the dramatic finish.

Trailing 10-7 at halftime, Bachus led the Skyhawks on a 40-yard drive that took just four plays and ended when he found Jaylon Moore for a 27-yard TD pass with 11:03 remaining in the third quarter for 14-10 lead.

The Tigers responded with an impressive 81-yard drive that took 12 plays. Andrew Knox ended the drive with a one-yard run as TSU regained the lead 17-14 at the 4:52 mark of the quarter.

Bachus’ first scoring pass of the afternoon went to Bowe and covered seven yards as the Skyhawks jumped to an early 7-0 lead at 9:43 of the opening period. Knox later capped a 62-yard, 10-play drive to scored from one yard out as the Tigers knotted the game 7-7 with 4:21 to go in the first quarter.

Antonio Zita’s 18-yard field goal with 3:13 remaining in the second quarter put the Tigers in front 10-7 at the intermission.

Bachus, who was voted the conference’s co-newcomer of the year for his performance, finished the game with 216 yards on 16 of 25 passing. Williams caught a team-high six passes in the contest, while Colton Dowell led the way with 69 yards on three receptions. Moore ended with three catches of his own for 57 yards.

Bowe, who caught two passes for 15 yards, was the top rusher for the Skyhawks. He finished with 19 carries for 93 yards and averaged 4.9 yards per carry on the day.

Te’Kendrick Roberson rushed 21 times for 84 yards to lead the Tigers in that department.

TSU QB Cameron Rosendahl was unable to get untracked passing the ball against the Skyhawks. He ended with just 10 completions on 23 attempts for 123 yards. Dayton Johnson, Al-Malik Moore and Steven Newbold each caught two passes on the day. Johnson finished with 40 yards, while Moore and Newbold end the day with 36 and 19 yards, respectively. Eastern Kentucky and Tennessee Tech both had trouble finding the end zone, but in the end the Colonels found it just a tad bit more as they defeated the Golden Eagles 22-10 on Saturday in Richmond.

Daryl McCleskey and Alonzo Booth both scored touchdowns for the Colonels and Sam Hayworth connected on three field goals, all in the second quarter, to account for EKU’s offensive output.

McClesky’s one-yard run later in the first period allowed EKU to tie the game at 7-7 with 2:41 left to go in the quarter. Hayworth booted field goals of 22 and 36 yards in early portion of the second quarter as the Colonels took the lead for good. His 29-yarder with 33 seconds left in the period put the Colonels in front 16-7 at halftime.

A 52-yard field off the foot of Haidar Zaidan pulled the Golden Eagles to within 16-10 with 7:47 left in the third period. But Tech was unable to score again.

Booth’s one-yard run at 10:52 of the final period of play ended the scoring as the Colonels improved to 4-3 in OVC play.

QB Parker McKinney accounted for 256 yards of total offense to lead the EKU offense. He had 188 yards through the air after completing half of his 26 pass attempts and added 68 yards rushing on 10 carries in the contest.

McCleskey and Booth combined for 158 rushing on the day. McCleskey led the way with 26 carries for 106 yards, while ended with 13 carries for 52 yards.

Bailey Fisher got the Golden Eagles on the board first with a six-yard scamper with 6:46 to go in the opening period.

Fisher completed 20 of 35 passes on the day for 148 yards, but was sacked seven times by the Colonels, including three sacks by Taquan Evans, and finished with minus-13 yards on the ground. As a team the Golden Eagles were held to just two yards rushing on 25 carries and finished with just 150 yards of total offense in the game. Darrius Stafford caught nine passes for 35 to lead Tech in that department.