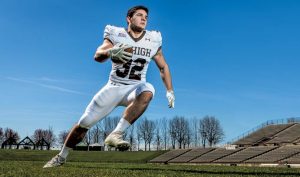 Last year, on a beautiful, hot, late October day, a 2-5 Lehigh football team traveled to the Bronx to take on a 2-6 football team, the Fordham Rams.

To a Patriot League outsider, this game might have seemed like nothing much to get excited about.

But the Mountain Hawks, with a 2-0 conference record and having an unexpected win over Colgate under their belts, were, oddly, in control of their playoff destiny.

If they won the rest of their games, they, at 6-5, would win the Patriot League Championship.

Instead, that 45-35 loss signified a bottoming-out point for the Mountain Hawks, a low-energy loss that put their title run in jeopardy.

Except for one player – RB Dominick Bragalone.

While the rest of the team was suffering injury after injury and hanging their heads, he was racking up yardage and scores, gaining 297 yards from scrimmage and averaging 8.1 yards per carry.

“I don’t care too much about what I did personally, I would have rather come out with the win,” he said after that fateful game. “We played with them throughout and it was a fun game. Now, it’s do or die for us.”

“We’re obviously not in the situation we want to be in,” Bragalone continued. “We’ve definitely made it harder on ourselves. But it just makes it more fun. The fact is every day at practice and every Saturday we’re out there to win. We have to win.”

It was after the low point of that loss where it seemed like the Williamsport, PA native seemed to be signalling to his team that he would carry them on his back, if necessary to earn that goal of a Patriot League Championship.

The following week in Lewisburg, Pennsylvania, not far from his hometown, Dominick put on a show again, rushing for 136 yards and 3 touchdowns in a 42-21 win over Bucknell that wasn’t really in doubt from the first quarter on.

Bragalone also featured prominently in a resounding win over Holy Cross and a thrilling come-from-behind win over their bitter Rival Lafayette would end up giving the Mountain Hawks the most unlikely of Patriot League titles with a 5-6 record.

Now in 2018, it looks and feels like the Lehigh faithful will be asking him once again to help pull up his team after one of the more brutal lopsided losses in recent Lehigh history.

“Dom is the one guy that we always count on,” head coach Andy Coen said this week. “He’s somebody who’s got to do a lot of things for us. The more balanced we are, running with Dom and throwing the ball consistently, we’ll be tough.”

Called a “burn the tape” game by head coach Andy Coen, last week’s 66-7 loss seemed to knock everyone involved with the program down. The defense, which seemed to have turned a corner somewhat, got torched for more than 700 yards by QB John Lovett and the crisp, talented Princeton offense.

Though the out-of-conference schedule was a definite step up from recent years – two losses came to nationally-ranked FCS teams, Villanova and Princeton, and a third came against an FBS team that seems to make a bowl every year, Navy -the 1-4 record still felt very disappointing, especially since they weren’t in the game with Princeton very long.

Even Bragalone was shut out, uncharacteristically being held under 100 yards and also being kept from the end zone for the third straight game, though he went out with a head injury in the second game against Villanova, and didn’t suit up at all against FBS Navy.

“We started the year in a bad spot,” Bragalone said this week, “But it was worse, actually, last year, and having that in the back of our mind that we can do it is really going to help us. It’s easy to be down about it, have no confidence, not go out there and give it your all every day in practice, but we’ve been the complete opposite. We’ve been getting after it with more physicality.”

It could be those little things that make the difference against Fordham, who lost last week 23-11 against Georgetown, their first defeat at the hands of the Hoyas in the Bronx since 1974, when the Rams and Hoyas were only sponsoring club football teams only having recently re-started sponsoring the sport.

The Rams, mostly a young team this season, have had a lot of ups and downs, though more downs than ups, it seems, especially last week. Three weekends ago, Stony Brook ran up 311 net rushing yards against Fordham, which has to make Bragalone, fellow backfield mate RB Rashawn Allen and the rest of the Lehigh offense feel like they should be able to make hay running the ball.

“I’m just trying to go out there and help the team win as much as possible,” Dom told Steve Lomangio of Lehigh Sports Information on Facebook Live this week. “I don’t think I’ve been doing enough, so I continue to work hard in practice to get better at the little things, and everyone else on offense is doing the same thing. If everyone does their 1/11th, we’ll be fine.”

Even so, the importance of this game on the path of the season isn’t lost on anyone. In 2018, as in 2017, Bragalone calls the upcoming matchup against Fordham “fun”.