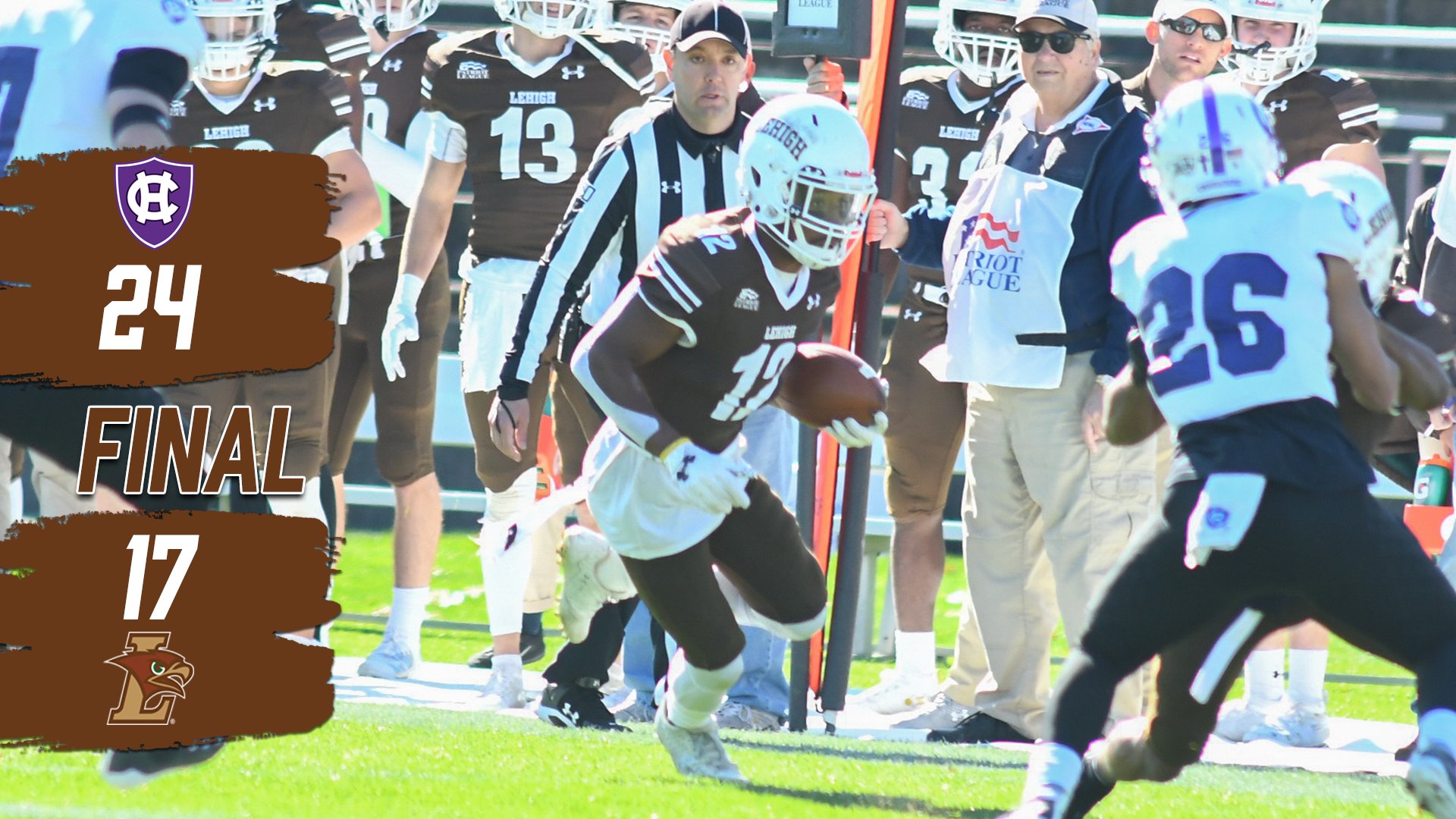 It seemed inevitable that this game would come down to the final minute.

Holy Cross and Lehigh, similar teams who have done the come-from-behind victory thing before, have made it their calling cards this year about how they execute late in games.

Late in the football game, Holy Cross made one more play than Lehigh.

Lehigh QB Tyler Monaco escaped some huge pressure from Holy Cross’ defensive front, and hucked up a pass, a 50/50 ball, that Crusader FS Chris Riley came down with about five yards short of the goal line.

The Mountain Hawks fell behind early, 7-0, and the Crusaders made Lehigh earn every yard in their attempt to come back.

Set up by an 88 yard run by RB Domenic Cozier, Holy Cross jumped ahead 7-0 win on a 1 yard sneak by QB Connor Degenhardt, and would go ahead 14-0 after RB Peter Oliver punched it in from 1 yard on a 6 play, 31 yard drive.

Lehigh responded with a 9 play, 75 yard drive ending in a 1 yard touchdown run by RB Zaythan Hill to cut the deficit to 14-7, but the Mountain Hawks would fall as far behind as 24-7 early in the third quarter after a 37 yard FG by PK Derek Ng and a 14 yard touchdown pass from Degenhardt to WR Tenio Ayeni.

“I’m really disappointed in the loss,” Gilmore said after the game. “We continue to work hard and fight until the very end, but there were a lot of self-inflicted wounds, particularly in the first half. Offensively, we did a lot of good things, but couldn’t string it together.”

Holy Cross controlled the momentum most of the first half, largely thanks to Cozier, who ran for an amazing 190 yards against Lehigh’s top-rated rushing defense. Degenhardt did enough to keep the party moving, going 10 for 22 passing but also throwing two interceptions, both by LB Pete Haffner.

Haffner’s second interception, however seemed to spark Lehigh’s turnaround, set up by intense pressure from LB Keith Woetzel. Two plays after the pick, Monaco found WR Dev Bibbens for a 33 yard touchdown pass to cut the deficit to 24-14.

Fans at Murray Goodman Stadium had seen this movie before – in their last four games, all wins, Lehigh had come from behind to either tie or take the lead late in the 4th quarter.

In the second half, Lehigh started to assert themselves in the running game, partially behind a gutty performance by RB Rashawn Allen, who gutted out 56 yards on 10 carries. A 12 play, 55 yard drive ended with a 38 yard FG by PK Austin Henning cut the deficit to 24-17, giving themselves a chance.

On defense, LB Riley O’Neil led Lehigh with 8 tackles, all solo, including some stuffs of Cozier as Holy Cross was trying to close it out.

After another defensive stop in the second half, the Mountain Hawks did get the ball back with a chance to tie the game with 2:48 to go.

They’d get all the way to the Holy Cross 35, but Riley’s interception was the final blow.

“I think lack of consistency sealed our fate,” Gilmore said. “It’s not an ideal situation. We slowly chipped away at the end, though and we didn’t let it get us down. And we had the ball. We just didn’t make the plays at the end this time to pull it out.”