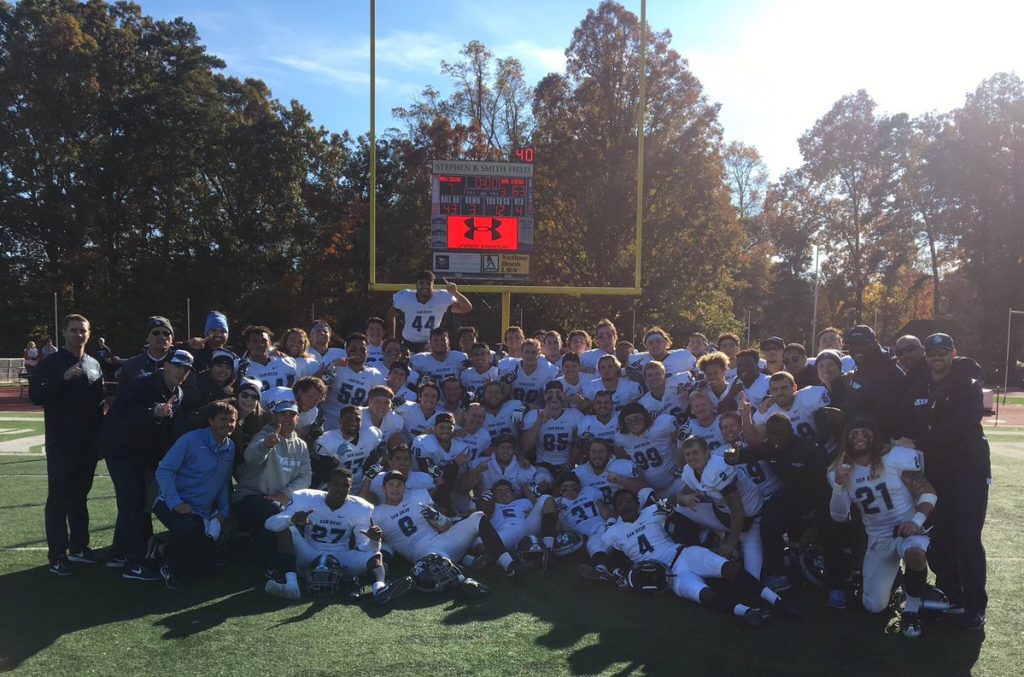 DAVIDSON, N.C. — For University of San Diego coach Dale Lindsey, Saturday’s 63-7 victory over Davidson that clinched the Toreros’ third automatic playoff berth in four years and another Pioneer Football League championship was just the culmination of months of hard work.

“We’ve been working toward this goal since the first day of practice in August,” Lindsey, a 74-year-old veteran of NFL, USFL, CFL and college gridiron wars, said.

In becoming the first squad to clinch a bid into the 24-team Football Championship Subdivision playoff field, the Toreros (8-2 overall, 7-0 in the PFL) relied on the same tried and true methods that have produced fruit since former coach Jim Harbaugh brought San Diego to national prominence a decade earlier.

The Toreros were joined later on Saturday by Central Connecticut State (Northeast Conference) and Jacksonville (Ohio Valley Conference) as auto-bid representatives into the tournament.

The 2,705 fans at picturesque Richardson Stadium, basking in beautiful sunshine on a brisk, near-winter afternoon, with fall leave colors in Monet-like change, watched USD quarterback Anthony Lawrence shred the Wildcat defense with deft touch as he completed 24-of-28 passes for 403 yards and three touchdowns in only three quarters of action.

And there was under-recruited freshman tailback surprise Emilio Martinez balancing out the attack with 66 yards on only 14 carries, with one six-yard scoring scamper.

“We played all of the 55 players we brought on the trip today,” Lindsay said. “We played 10 freshmen today.”

And even when members of the second and third teams were on the field, the Toreros operated without missing a beat.

Third-string, redshirt freshman QB Alex Farina raced 87 yards on his only carry of the game for San Diego’s sixth of seven touchdowns and completed the scoring with a 12-yard toss to Alex Spadone.

Defensive end Jonathan Petersen set a new school career record the previous week with three sacks against Drake in a 45-15 Torero win to give him 38 in four years. It broke the mark of 35, held by former USD All-American Eric Baktiari, established from 2004-07.

But Petersen was probably even more pleased with his first career touchdown on Saturday.

Coming in at fullback in the third quarter, Petersen smashed in from a yard out to give USD a 49-7 advantage heading to the final period.

Considering how well San Diego played, even the temperamental Harbaugh would have been pleased. In a year where his Michigan Wolverines have struggled to execute the offensive basics the Toreros have down so pat.

Lindsey is experienced enough to know you don’t need to fix something that isn’t broken, so San Diego looks remarkably similar in scheme to the Harbaugh days.

A big reason for that is the presence of assistant head coach/offensive coordinator and potential head-coach-in-waiting Tanner Engstrand, who started at USD as a Harbaugh grad assistant and has been with the Toreros since 2005.

“I learned the basics of what we do under (Harbaugh),” Engstrand said. “We’ve been able to recruit to our philosophy. Our systems has its roots with the West Coast offense, which is all based on timing. Unlike teams that just try to spread you out, we use tight ends. We believe in establishing the run game.”

That philosophy includes uncovering players that few other teams wanted, such as Lawrence and Martinez and has been a hallmark of this special program since Harbaugh’s found a skinny, inexperienced quarterback in 2003 named Josh Johnson, who flew under the radar after playing sparingly at Oakland Technical High School because of injuries.

As a multi-faceted athlete, Johnson became a three-time All-American, who fired 43 touchdowns with but one interception (which bounced off a receiver’s shoulder pads) and finished third in the 2007 Walter Payton Award balloting behind quarterbacks Jayson Foster of Georgia Southern and Eric Sanders of Northern Iowa.

Ten years later, Johnson is still playing in the NFL as a backup passer with the Houston Texans.

“Those 10 (assistant) coaches are always digging into the talent pool,” said Lindsey, who is quick to give credit to his staff.

And a decade later, coaching staffs may have changed from Harbaugh, to Ron Caragher, and now Lindsey, but the Toreros are still the team to beat year-in and year-out in the PFL.

San Diego had never won a PFL title before Harbaugh arrived. All the Toreros have done since is win, or shared the title 10 times.

“That is our goal every season,” Lindsey said.

Lindsey had made the transformation from an intense starting linebacker — at Western Kentucky as a college player and with the Cleveland Browns and New Orleans Saints in nine NFL seasons — to a relaxed, players’ coach with the Toreros.

Lindsey can still be fiery, as witnessed by his halftime lecture on Saturday, when he said he didn’t think his team was focused, despite a 35-point lead.

With one game left in the regular season, at home next Saturday against Marist, Lindsey will demand similar attention to detail as the playoffs loom ahead.

Knowing that because of its non-scholarship model and the fact that it plays a less-demanding schedule than most of the other playoff teams, San Diego will likely be on the road for the first round of the postseason on Thanksgiving weekend, probably facing a squad from the generally tough Big Sky Conference.

But the Toreros changed expectations last year when they throttled Cal Poly, 35-21, to become the first PFL team to win an FCS playoff game. A week later, USD’s bubble burst with a 45-7 loss to four-time defending national champion North Dakota State in the second round.

“It was a long time coming,” said Lindsey, whose unit had dropped its previous playoff game, 52-14, to Montana in 2014. “I think (the postseason experience) will help us.”

Lindsey noted that automatic bid for the PFL and winning a playoff game have helped in recruiting.

“It’s a good selling point for our program,” he said. “We sell that. It’s like a bowl game.”

And that hard work that began in August will only get more difficult now that the Toreros have reached the goal of another playoff berth.

“The competition will get a whole lot better,” said Lindsey. “We will be going up against scholarship schools. You have to play better than you have in the previous 11 games.”