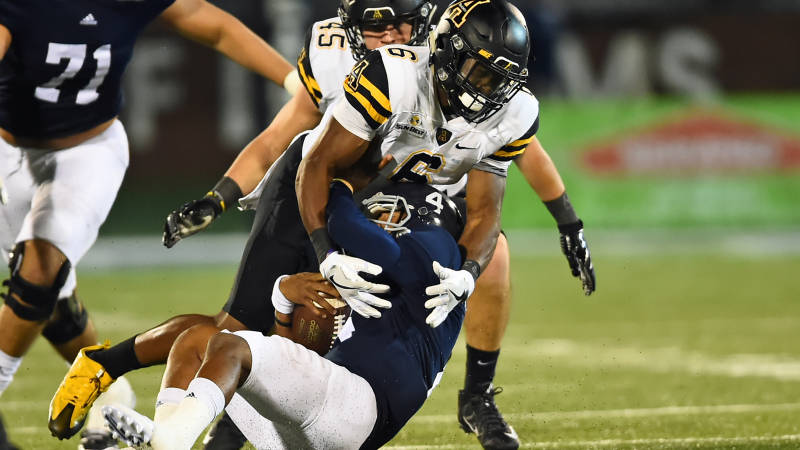 And the GSU offense definitely had the blues after another dominating performance by the Mountaineer defense keyed ASU’s 34-10 victory before a Paulson Stadium crowd of 23,474 and the ESPNU national television audience.

After App State’s offense and special teams self-destructed early to grant the Eagles a 10-0 lead, the defense provided a steadying force to keep the Mountaineers within striking distance.

Appalachian’s defense has allowed just one touchdown in four Sun Belt games (giving up a six-pointer on the final play from scrimmage against Idaho) and became only the second team ever to hold Georgia Southern without an offensive TD at Paulson Stadium.

The Eagles finished with an anemic 159 yards on offense — the lowest output ever for their usually-potent attack at this historic venue. GSU was limited to 65 yards rushing on 26 carries, its lowest ground output since a 52-16 loss in Boone in 2009 where it was held to 15 rushing yards.

Freshman cornerback Clifton Duck headed the defensive effort for the Mountaineers with his fifth interception of the season, one off the freshman school record of six, set by Corey Lynch in 2003. Duck is tied for the NCAA lead in interceptions and the 14 pick-offs by the Mountaineers is also the best in the nation.

App State (6-2 overall, 4-0 in conference) won its fifth consecutive game and tied Troy at the top of the Sun Belt standings. The Mountaineers face the Trojans Nov. 12 on the road.

Georgia Southern (4-4, 3-2) lost for the fourth time in five outings and fell two games behind the league leaders in the loss column.

“We couldn’t establish a run game and we have to that,” first-year GSU coach Tyson Summers said. “It forced us into doing something we didn’t want to do and that’s throwing the ball.”

After suffering a pair of uncharacteristic interceptions in the first half, ASU quarterback Taylor Lamb showed his patience and poise to finish 16-of-27 passing for 199 yards and added 10 carries for 94 yards and two touchdowns on the ground.

But Lamb was quick to credit the defensive effort for keeping the Mountaineers in the game early.

“The defense makes it easy for us,” said Lamb. “When things were not going well early, the defense said ‘They’re not going to score on us.’”

The dynamic rushing duo of Jalin Moore and Marcus Cox found enough running room in the second half to combine for 241 yards on 33 attempts.

Cox returned from a five-week absence with his left-thigh injury against Miami to log 18 carries for 115 yards and one brilliantly-executed option burst for 12 yards and a touchdown.

Moore slashed through the Eagle defense with a series of spectacular cuts and incredible balance for a game-high 126 yards and one highlight-reel, 15-yard TD jaunt.

Appalachian finished with 344 yards on the ground and 498 yards of total offense.

“It was great to have all of our weapons back,” Satterfield said. “Our guys did not flinch. All of that experience comes to the forefront in a game like this.”

But ASU managed to tie the game before the intermission on Lamb’s 14-yard scoring scamper midway through the second quarter and the first of two field goals by freshman Michael Rubino.

After the break, the contest was totally dominated by the Black and Gold.

Rubin, looking as confident as he has all season, pounded through a 28-yard field goal to give ASU its first lead with 3:03 left in the third quarter, ending that 13-play drive.

Two plays later, strong safety A.J. Howard made a spectacular pick-off of freshman Seth Shuman’s pass to give the Mountaineers the ball again at the ASU 48.

Lamb’s quick strike to Shaedon Meadows (six catches for 126 yards) resulted in a 22-yard gain and Lamb dashed 30 yards on the next play to build Appalachian’s lead to 20-10 before the third period ended.

The Mountaineers composed two stereotypical drives in the fourth quarter of 88 and 81 yards to tear the heart out of GSU with the touchdown runs by Cox and Moore.

“There was nothing that was going to keep me from playing this game,” said senior inside linebacker John Law, the preseason Sun Belt defensive player of the year, who returned after missing two games with an injury.

Appalachian will be back on a more normal schedule next week when it returns to Kidd Brewer Stadium for its Saturday game, Nov. 5 at 3:30 p.m. against Texas State in Sun Belt play.