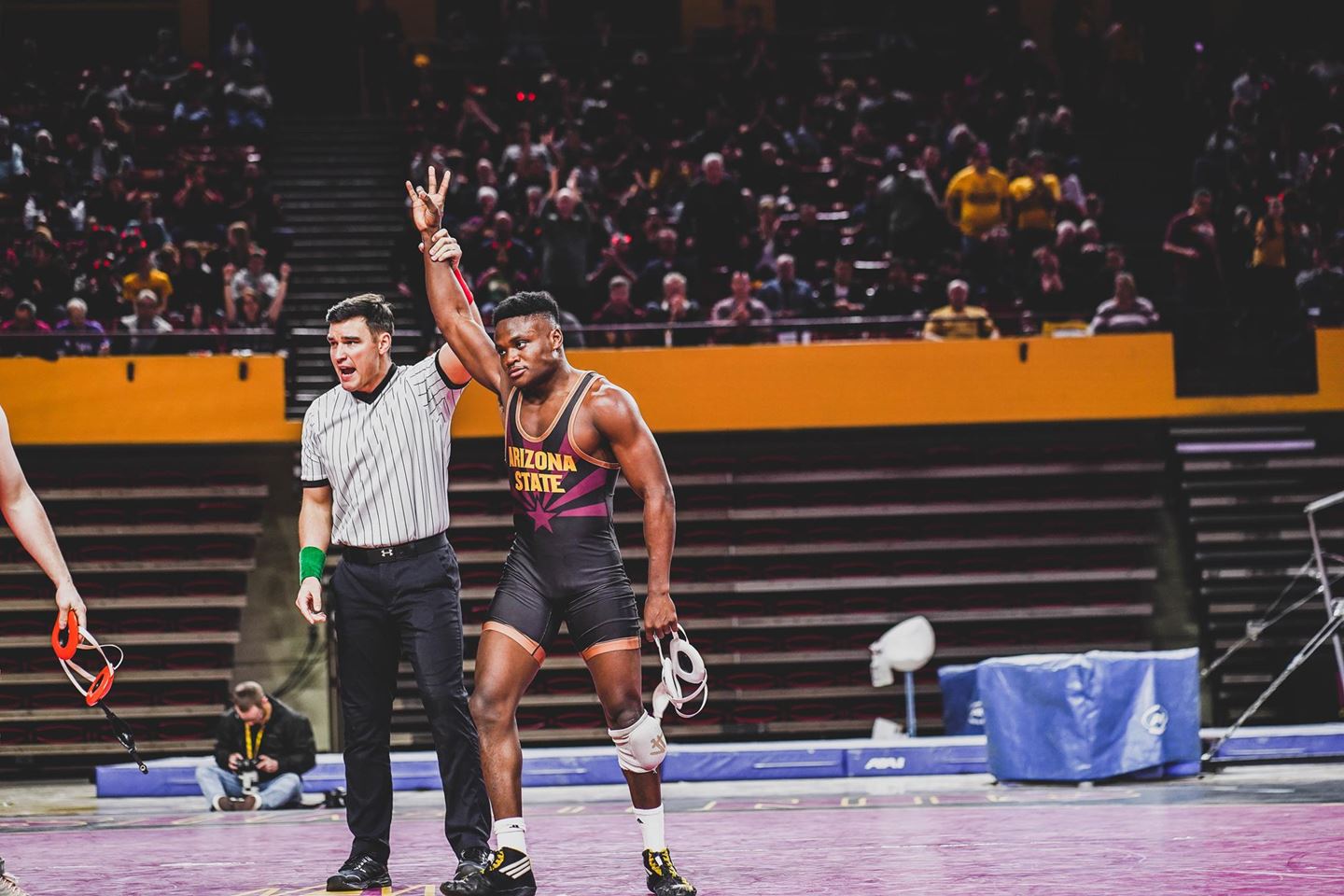 TEMPE, Ariz. – Jacori Teemer was looking for something new when he stepped on the mat for Arizona State in its dual against Oregon State.

He fulfilled that goal in a big way to help spark Arizona State to a 26-12 win over Oregon State at Jan. 17 at Desert Financial Arena on the ASU campus.

The win improved the fourth-ranked Sun Devils to 9-1 on the season, while the Beavers dropped to 4-1 on the year.

Teemer, one of the top recruits coming out of high school in 2018, had never pinned a collegiate opponent prior to squaring off against OSU’s Michael Murphy.

Teemer, a redshirt freshman, gained control of Murphy’s right arm off the opening whistle and used a hard sweeping headlock a short time later that left Murphy with virtually no recourse as he went to the mat before Teemer scored the pin in just 43 seconds.

“(Teemer) has done everything we have asked of him since he arrived on campus,” assistant coach Lee Pritts said after the dual against the Beavers. “He does nothing but listens and works hard every day to improve … and tonight we saw the fruits of those labors.

“The exciting thing about (Teemer) is that he is only going to get better and better,” Pritts added.

Teemer’s pin was one of two on the night for the Sun Devils as No. 6 ranked Josh Shields followed Teemer with a pin of his own. Shields needed 3:47 before ending his bout against Aaron Olmos.

Teemer’s pin tied the team score at 9-9 as the two teams went into the intermission and Shields began the second half of the dual with his pin of Olmos to move the Sun Devils in front 15-9. OSU never seriously challenged after that as ASU won four of the final five matches on the night.

Arizona State’s Brandon Courtney started things off when he defeated Brandon Kaylor 13-6 in their bout at 125 pounds.

Courtney held a precarious 4-2 advantage late in the first period and appeared in jeopardy of losing that lead when Kaylor was able to gain control of a leg near the edge of the mat. Courtney was able to keep from going to the mat and eventually turned the tables to score a takedown with 51 seconds left in the period to increase his lead to 6-2 heading into the second period.

“Sometimes doing the little things turn out to be a big difference,” Pritts said. “Instead of giving up the takedown and tying the match, (Courtney) worked hard for control and managed to extend the lead and prevented (Kaylor) from getting any sort of momentum. That was key.”

Arizona State also got bonus points from Anthony Valencia when he scored a 19-4 technical fall over Jackson McKinney at 174 pounds.

Valencia held a 17-4 lead after two periods and ended the match midway through the bout with a takedown at the edge of the mat to provide the 15-point difference necessary for a technical fall. His win pushed the ASU lead to 20-12.

Oregon State hung tough in the early going. After Courtney’s win over Kaylor put the Sun Devils in front 3-0, the Beavers reeled off three straight decisions to take a 9-3 lead in the team score.

Devan Turner and Lane Stigall both slipped by their opponents at 133 and 149 pounds, respectively, and teammate Grant Willits put on a strong showing with three takedowns of Navonte Demison in their bout at 141 pounds before emerging with an 8-2 decision before Teemer turned the tide back in favor of the Sun Devils with his pin of Murphy.

Arizona State is idle until playing host to Stanford on Jan. 31 in the final home dual of the season for the

Sun Devils who close the season with six straight duals on the road.

Oregon State, meanwhile, returns to action Jan. 25 in Buies Creek, N.C. when the Beavers take part in a triangular against host Campbell and against Presbyterian College.

Arizona State and Oregon State, along with the rest of the Pac 12 teams will compete in the conference March 7 at Stanford.