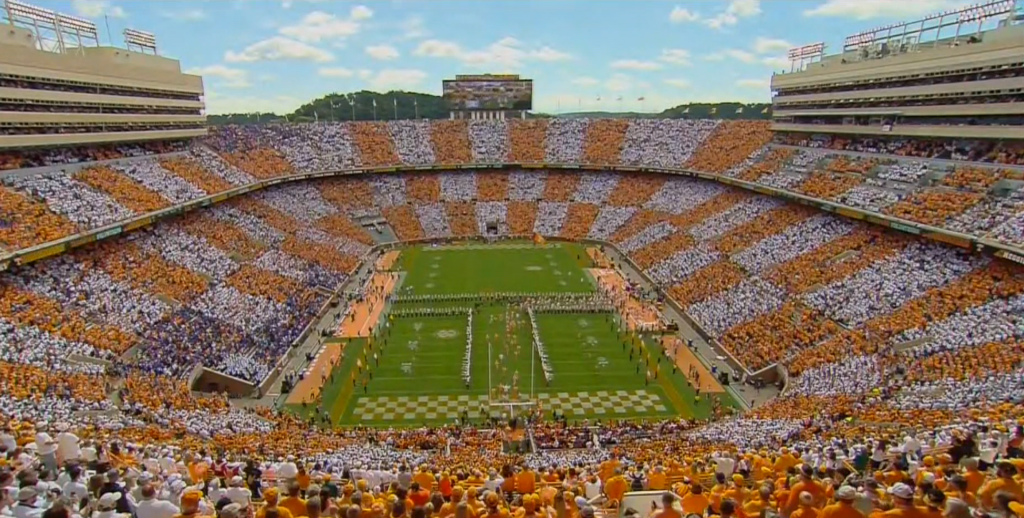 KNOXVILLE, TN. — With rain gently pelting the Field Turf a couple of hours before game time at the football season opener between Appalachian State and Tennessee at Neyland Stadium, I was taken back to my first visit to this historic venue in 1990.
It was a Friday afternoon, in between the NCAA Men’s Basketball Tournament first and second rounds that I was covering at Thompson-Bolling Arena next door. Being based in Southern California, I thought it might be my only chance to ever see one of the grandest stadiums in college football.
Rain was pouring down that afternoon as I envisioned what it would be like on a Saturday in the fall, watching an enthusiastic, orange-clad crowd, over 100,000 strong, screaming for their Tennessee Volunteers.
After moving to the east coast, I finally had a chance to cover Tennessee at home for its opener against Montana in 2011. Everything lived up to my expectations, including the lightning and thunderstorm just before kickoff that forced officials to clear the stadium and delayed the kickoff for over an hour.
Having already driven from the Philadelphia suburbs in the early-morning hours to catch the noon kickoff in Blacksburg, Virginia as Virginia Tech hosted Appalachian State, the delay in Knoxville made a long day and evening even longer, but I wasn’t complaining.
Extra time to enjoy the atmosphere at Neyland Stadium and to raid the ice cream freezer in the Tennessee press box a couple of extra times was definitely appreciated.
Opening weekends in college football are among my favorite events of the year. There have been many Labor Day weekends when I have covered as many as four live games at a variety of venues in different states.
On one of those wild kickoff weekends, I witnessed Delaware’s Omar Cuff scorch the William & Mary defense for an FCS-record seven rushing touchdowns in the first-ever Colonial Athletic Association football game in beautiful Williamsburg, Virginia.
The next evening, I was on a flight to Detroit, Michigan, not knowing I was hours away from a day of destiny in the University of Michigan’s Big House.
That was nine years ago today and Appalachian State’s stunning 34-32 victory over the fifth-ranked Michigan Wolverines.
A few months ago, I found myself sharing lunch at Bank of America Stadium before a Carolina Panthers-Green Bay Packers NFL game with Austin Murphy, who had written the Sports Illustrated cover story about the Appalachian State-Michigan upset.
It was as if a pair of war veterans were trading stories about our shared battle experience.
The lesson I learned that day was you never know in sports when you will be covering one of the games of your life.
With Appalachian State facing No. 9-ranked Tennessee tonight, in the back of my mind is the thought that maybe a similar magic can happen again. And if not tonight, maybe it will happen some other time in another press box.