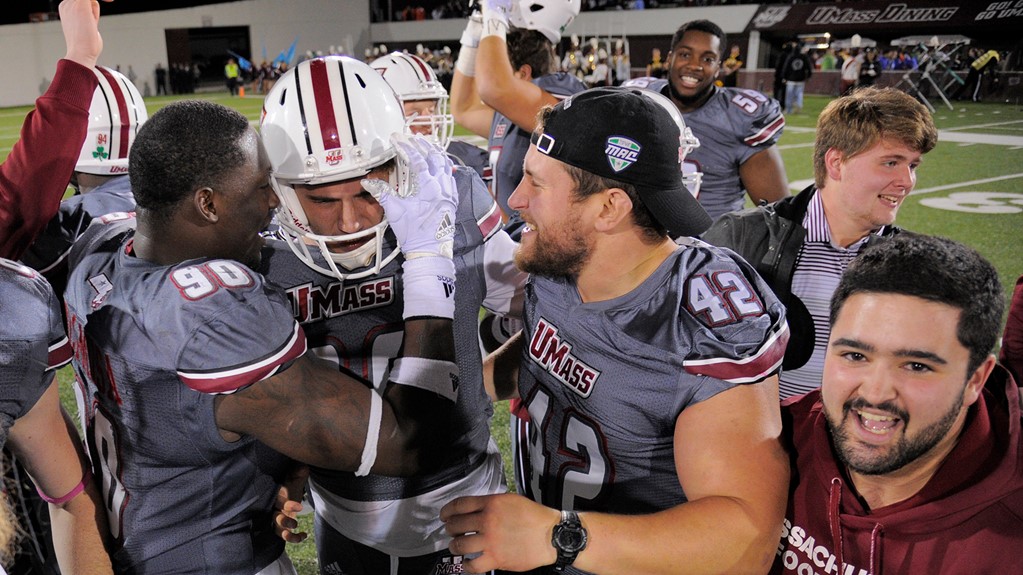 Senior Logan Laurent kicked three field goals, including a 45-yarder to force extra time and a 36-yard boot in the second overtime period to lift UMass to a surprising non-conference victory.

The Mountaineers (5-3 overall), who struggled all afternoon with third and fourth-down conversions (6-for-21), were two yards short of a first down that would have allowed them to run out the clock in regulation while holding a 20-17 lead with just over two minutes to play.

The Minuteman (2-6) responded by marching from its own 20, without any timeouts, 58 yards in 11 plays to the App State 22 to set up Laurent’s tying field goal — following an illegal procedure penalty —with five seconds left on the fourth-quarter clock.

After the two teams traded touchdowns in the first overtime, a fumble by freshman Daetrich Harrington on the first play of the second overtime session put UMass in position to win. Ali Ali-Musa forced the fumble by the ASU tailback and Bryton Barr recovered it for the Minutemen.

That concluded a frustrating day for the Mountaineers, who fell behind 10-0 in the first period and 17-7 in the second stanza before rallying to take the lead on a pair of second-half field goals from new place kicker Chandler Staton from 40 and 30 yards. That second kick from the sophomore, who replaced a struggling Michael Rubino, gave Appalachian its first advantage with 4:42 remaining.

The lead could have come sooner for the Mountaineers if not for two controversial penalty calls that negated touchdowns in a questionably officiated game where the teams were flagged 22 times for 186 yards.

ASU cornerback Tae Sims picked off an Andrew Ford pass with the Mountaineers trailing 10-7 in the second quarter and returned it 57 yards down the sideline for an apparent touchdown. Defensive tackle Myquon Stout provided a block for Sims away from the play in the middle of the field, going shoulder-to-shoulder with Ford.

The referee, perhaps screened by Stout on the play, threw his flag for a personal foul, but replays showed that it was a totally clean hit. Ford even took a glance at Stout before receiving the contact.

Ford, the UMass starting QB, was knocked out on the hit and removed on a stretcher after a long delay. He acknowledged the crowd and his team with a thumbs up as he was wheeled to an ambulance. It was the second time this season that Stout had knocked a starting quarterback from a game, also doing it against Georgia.

Instead of a quick score and a 14-10 advantage, Appalachian’s offense started at the Minuteman 40 and suffered through a three-and-out and had to punt. UMass running back Marquis Young responded with a 95-yard scamper on the next play to push the lead to 17-7.

App State lost another TD with 6:14 remaining when quarterback Taylor Lamb fired a strike for 21 yards to Ike Lewis, who squirted into the end zone. But tackle Victor Johnson was penalized for holding and the Mountaineers had to settle for Staton’s field goal to give them their first lead.

That proved crucial when UMass drove for the tying field goal behind the play of backup passer Ross Comis, who completed 6-of-8 passes on the final drive of regulation.

Despite the heartbreaking loss, the Mountaineers were sparked by two outstanding performances.

Senior inside linebacker Eric Boggs played perhaps the most incredible contest of his remarkable ASU career with 15 tackles, one sack, one interception and one forced fumble. The fumble recovery by defensive end Tee Sims, who led App State with three sacks, set up Lamb’s 15-yard scoring scramble for the Mountaineers’ first TD.

Redshirt freshman Marcus Williams rumbled 26 yards before Lamb’s touchdown run and finished the game with 25 carries for 125 yards in his first career start.

It was the second straight win for UMass over a Sun Belt school after the Minutemen started the season with six consecutive losses. Massachusetts toppled ASU’s winless rival Georgia Southern 55-20 last week.

It was the first meeting between ASU and UMass since the Mountaineers beat the Minutemen 28-17 in the 2006 NCAA Division I national championship clash.

Appalachian retained its lead in the Sun Belt on Saturday and is 4-0 heading into next Saturday’s 3 p.m. conference game at Louisiana-Monroe.