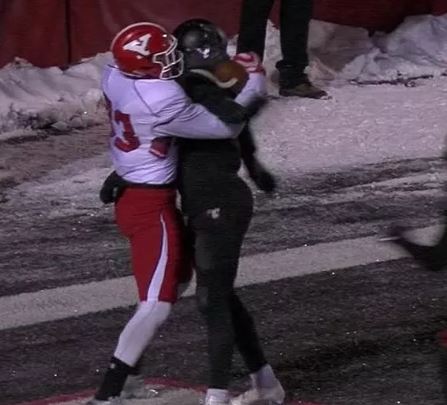 CHENEY, Wash.–Youngstown State dramatically beat #2 seeded Eastern Washington in a Division I FCS national semifinal on Saturday night, 40-38, to advance to the national championship game against James Madison on Jan. 7 in Frisco, Texas. It happened on a momentous play on a frigid day at Roos Field with game temperatures hoovering around 0 degrees.

Youngstown State (12-3) tight end Kevin Rader trapped the ball on the back of Eastern Washington linebacker Ketner Kupp. He somehow managed to squeeze a game-deciding four yard touchdown pass from quarterback Hunter Wells with just a second left in the game.

The final play was controversial if Radar actually caught the ball in bounds but officials reviewed the catch and determined the ruling on the field stood.

The playoff unseeded Penguins downed the ball on the extra point to avoid a blocked PAT run back, and were able to fend off several laterals on the kickoff to send the Penguins to the national title game for the first time since 1997.

The first of two McCaster first-half rushing touchdowns put the Penguins on the board first to take a 7-0 lead, but Roldan Alcobendas hit a 21-yard field goal and Gage Gubrud connected with Cooper Kupp with a four-yard touchdown pass to make it a 10-7 game with 31 seconds left in the opening quarter.

Kendrick Bourne caught an 83-yard touchdown pass with 12:35 left in second quarter to advantage the Eagle lead to 17-7.

YSU answered this score with a 42-yard field goal from Zak Kennedy with 3:04 left in the second quarter to narrow the EWU lead to 17-10.

Eastern Washington (12-2) looked to then take over the game as its lead grew to 14 points at 24-10 when running back Sam McPherson registered the first career receiving with 2:48 remaining in the half.

On the ensuing possession, YSU drove down the field but faced a 4th-and-1 at the Eagles’ 20-yard line. Instead of kicking the field goal, Penguins head coach Bo Pelini gambled and McCaster broke through the Eastern Washington defense to score to give the Penguins a much-needed touchdown before halftime to trail just 24-17.

The Penguins opened the second half scoring after a long drive stalled but still Kennedy hit his second field—this one from 20-yards out to trim the Eagle lead at 24-20 with 8:48 left in the third quarter.

EWU would answer right back on its next possession with a Shaq Hill 18 yard touchdown grab to extend the lead to 31-20 with 6:46 left in the third quarter.

As the game went to the fourth quarter, YSU scored on back-to-back drives and held down the powerful Eagle offense over this span. The first came as Wells hit wide receiver Bailey, Alvin from 11 yards out with 12:14 left in the game.

Following another defensive stop, YSU took a 34-31 lead as McCaster scored his third touchdown of the game—this one from 12 yards out with 6:30 left in the game.

EWU answered YSU back-to-back touchdowns with a seven-play, 80-yard touchdown drive in little time, reclaiming a 38-34 lead with 4:24 left in the game. Shaq Hill ran in on a jet sweep from a yard out for the go-ahead points for EWU.

Hunter Wells went 16-of-24 for 243 yards passing and two touchdowns. Tevin McCaster and Jody Webb each went over 100 yards on the ground, with McCaster running for 154 yards and three touchdowns on 29 carries.

The Penguins had 506 yards of total offense against the Eagles, who had allowed just 449 yards in its first two playoff games combined.

Gubrud, who passed for 353 yards and had 411 yards of total offense, broke the EWU and Big Sky Conference records for passing offense and total offense in the first half, and then broke the FCS records in both in the second half. He finishing with 5,160 yards passing and 5,766 yards of total offense. The prior Big Sky record was held by Vernon Adams Jr. in 2013 with marks of 4,994 and 5,559. The FCS record had been 5,076 passing yards set by Old Dominon’s Tyler Heinicke in 2012.

All-American Cooper Kupp caught 10 passes for 180 yards and two touchdowns in his last collegiate game for the Eagles.

Youngstown State was a perennial power in the 1990s under Jim Tressel. Between 1991 and 1999, the Penguins won four national titles and finished runners-up on two occasions.

With an exception of a semifinal run in 2006, YSU had not tasted much postseason success since then. In fact, this was the school’s first playoff appearance since that year but won two road games to advance again to the national title game.