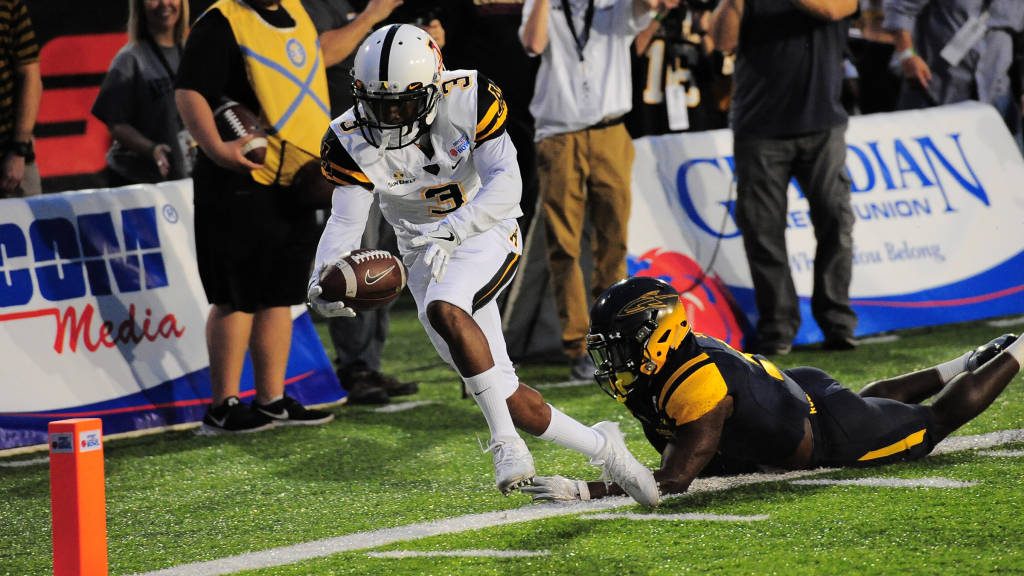 MONTGOMERY, Ala. — Excuse Appalachian State’s football team for feeling like it was reliving Groundhogs’ Day all week in preparation for the Raycom-Camellia Bowl. But in the end, the Mountaineers took an eerily similar victory over Toledo to their 31-29 win against Ohio University here last year.

Freshman Michael Rubino’s clutch, 39-yard field goal with 5:14 remaining lifted ASU to a 31-28 lead and Jameson Vest’s missed kick from 30 yards out at the 1:48 mark allowed the Mountaineers to hang on for their second consecutive Camellia Bowl win before 20,300 fans at the historic Crampton Bowl.

In an entertaining contest, filled with dynamic plays from start to finish, App State came up with a near-perfect conclusion to an incredible season. The Mountaineers (10-3) won a share of their first Sun Belt Conference championship, returned to a bowl in just their second year of eligibility and won their final game to finish with double-digit victories in back-to-back years at the Football Championship Subdivision level.

“Our goals from the start were to win the Sun Belt, get back into a bowl game and win,” ASU coach Scott Satterfield said. “I don’t know what else you can do.”

The list of heroes on this special night was voluminous, including quarterback and most valuable player Taylor Lamb, running back Marcus Cox, linebacker John Law, receivers Ike Lewis and Deltron Hopkins, returnman Darryton Evans and, of course, Rubino.

Lamb (14-of-32 passing for 119 yards, nine carries for a career-high 126 yards rushing) connected with Hopkins on a 16-yard jet sweep/shovel pass for the game’s first touchdown and Cox dashed in from 13 yards out for ASU’s second score midway through the next period.

Lamb added a 13-yard option scamper to give the Mountaineers another lead in the third stanza and Evans electrified the crowd with his 94-yard kickoff return touchdown 14 seconds after Toledo had tied the game, 21-21, later in that quarter.

“When they tried to stop (Cox and fellow-1,000-yard rusher Jalin Moore), they forgot about Taylor,” Cox said.

Seniors Cox and Law put incredible stamps on their final games as Mountaineers.

Cox became the first Appalachian player to go over the 5,000-yard rushing mark for his career early in the game and became one of a handful of Division I players to run for 1,000 yards in four consecutive season. Cox carried 22 times for 143 yards.

Law, healthier than he has been in weeks, led the defensive effort with 11 tackles, including six solo stops and one tackle for loss.

“I felt I wanted to live it all out there,” Law said.

And his effort had a dramatic effect on his teammates all afternoon and evening.

“It was a great college football game (and) we did the things to win at the end,” said Satterfield. “We have so much fight and so much integrity. You can’t win like this unless you do things the right way.”

Four times, the Mountaineers spurted to seven-point leads and on each occasion, the Rockets rallied to tie. Only after Rubino’s field goal in the fourth quarter put Appalachian ahead for a fifth time did Toledo finally falter.

Rubino’s kick followed a six-play, 35-yard Mountaineer drive that was sparked by a simple misdirection play that Cox broke to the sideline for 26 yards, with a huge seal block from guard Colby Gossett at the corner. Cox’s timely run moved the ball to the Toledo 31 and left Appalachian knocking at the red zone.

When Lamb came up a yard short of another first down at the Rocket 22 with his 10-yard quarterback draw three plays later, Rubino was in position to give the Mountaineers their final lead.

A year earlier, Zach Matics drilled a 23-yard kick on the final play of the game to win the bowl game for the Mountaineers. But Matics was an All-American-caliber senior with plenty of high-pressure success on his resume.

Rubino stepped into the graduated Matics’ role in the season opener and stumbled immediately, missing an extra point and potential game-winning, fourth-quarter field goal at Tennessee. It took a large part of the campaign for Rubino to regain his nerves.

“He’s come a long way in the course of the season,” said Satterfield. “I don’t think he has missed a field goal under 40 yards the whole season.”

Toledo immediately threatened when Corey Jones returned the ensuing kickoff 31 yards to the Rocket 43 and Kareem Hunt (22 attempts for 120 yards and two TDs) rifled out runs of 17, 11 and 13 yards as Toledo closed in on scoring range.

Appalachian finally held at its own eight and the Rockets took a five-yard, delay-of-game penalty to give Vest a better angle on his kick. Vest was 13-of-18 during the regular season on field goals, 61-of-62 on extra points and had been successful on 32-of-45 career field-goal attempts.

This time, however, Vest’s effort sailed wide right and all the Mountaineers needed was another Cox first down — which he accomplished on the next play — to run out the clock.

Toledo (9-4) stayed in the game in large part because the play of quarterback Logan Woodside (18-of-26, 24 yards and two TDs passing) and Hunt on offense and some spectacular pass coverage by one of the top secondaries App State had seen all season.

Woodside finished with 45 TD passes as a junior, one off the Mid-American Conference single-season record, and Hunt became Toledo’s all-time leading rusher.

“We had a chance to go don and tie the game and we didn’t come through,” Woodside said. “We didn’t turn the ball over and we gave ourselves a chance to win.”

But even though App State and Toledo played turnover-free football, the Rockets gave up a few too many big plays in critical situations to win.

“A couple of times, (Lamb) got us out of our (defensive) responsibilities and he made us pay,” Toledo coach Jason Candle said. Appalachian “made the plays they had to make.”

And those key plays tipped a bowl game in Appalachian’s favor for the second straight year.

“Our defense held up good enough,” Satterfield said. “Even if that guy would have made (the field goal), I felt good about it because we had about two minutes on the clock to go back down and kick another field goal to win the game. I loved the game. It was a fun game. It was a back-and-forth game. It was exciting.”