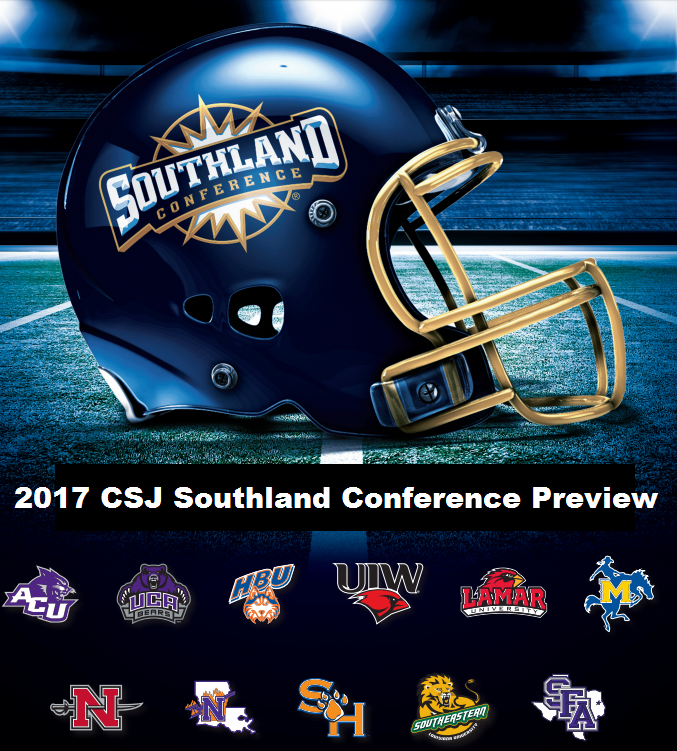 Fearless Prediction: The Bearkats have dominated the Southland Conference as of late and likely will again this year but have not been able to translate that into playoff success. SHSU last year won its opening second round contest at home narrowly over Chattanooga but proved to be really no match for the eventual champion James Madison in a blowout loss. The Bearkat offense should not miss a beat with eight starters back including Payton Award winner Jeremiah Briscoe and a number of key receivers. The defense is where the Bearkats need to get better and hope to use senior end P.J. Hall and linebacker Justin Johnson as springboards to more success nationally in the playoffs but will need to replace six of the starters on this side of the ball from last year’s team.

Impact player: QB Jeremiah Briscoe is coming off a record breaking junior season where he threw for an all-time FCS record 57 touchdowns. He also threw for a school best 4,602 yards on an offense that averaged over 49 points and 547 yards per game. Look for similar numbers again from Briscoe this year.

Fearless Prediction: The Bears are likely going to give SHSU their top opposition after finishing with a 10-win season a year ago. UCA also gets the Bearkats at home in late September in what just decide the SLC race early. Last year, the Bears won its opening round game against Illinois State before falling to Eastern Washington in the second round. This year’s team returns its entire offensive line and its five top running backs to go with quarterback Hayden Hildebrand but must replace its top two wide receivers. The defense will have just six returning starters but hopes to duplicate its efforts from a season ago where they were very stout against the run.

Impact player: QB Hayden Hildebrand likely would be the one the national media would be talking about as a top signal caller in the Southland if Briscoe was not also in the league. The now-senior threw for over 3,000 yards and 19 touchdowns last year.

Fearless Prediction: The Cowboys recorded its 12th consecutive winning season albeit last year with just six wins to miss out on a postseason bid. Newcomer of the Year in the league in James Tabary should be the leader on offense in the hopes to get back to the postseason for McNeese. He is amongst 97% of the offensive production back this year. The Cowboy defense was the issue last year so the now-head coach Lance Guidry in his second season will take back the defensive play calling—a position he had before taking the head job.

Impact player: DB Andre Fuller takes a leadership role in the secondary in his now senior season. Last year, he was second on the team with 58 total tackles to go along with a sack and three tackles for a loss. He also intercepted one pass and returned it 27 yards for a touchdown for the first score in a 38-13 win over Nicholls.

Fearless Prediction: The Colonels had a winning record within conference play for the first time since 2005, although they finished 5-6 overall. Nicholls as the record shows has improved in just about all aspects under Coach Tim Rebowe’s two years in Thibodaux. This year’s team returns 16 starters and hopes to take the next step towards getting back to playoff contention and will have early tests against SHSU and McNeese to see if it really is.

Impact player: DT Sully Laiche was an All-SLC performer after his freshman season and will continue to look to improve the defense. He was second on the team in tackles with 60 (29 solo) las year and finished with 13.0 tackles for loss, including 9.5 sacks. His sack total ranked 12th in the FCS and his best game came in double OT win vs. SFA where he had 14 tackles.

Fearless Prediction: The Lions rebounded from a four win season in 2015 to a seven win campaign in 2016 and narrowly missed out on a playoff bid. This year SLU, however, must replace 13 starters so Coach Ron Roberts job will be trying to gel a number of new players in the lineup.

Impact player: RB Julius Maracalin is one returning starter and should help form this year’s team. He led the team last year with 747 rushing yards and eight touchdowns on 147 carries, which was good enough for fourth in the league in rushing yards The now-junior broke out over the final three games of the season, rushing for 544 yards and five scores in three straight SLU victories to nearly get the team into the postseason and will look to help from the start this year.

Fearless Prediction: SFA must replace graduated quarterback Zach Conque for his dad’s (Clint) team. A year ago, the Lumberjacks won five games and offense really wasn’t the problem. The team was 10th in the league in total defense and dead last in scoring defense so Conque hired former UT Martin defensive coach Jeff Byrd for this position in the hopes to improve this side of the ball.

Impact player: DE John Franklin should be an aid for the new coach on the defensive side going into his senior season. He finished last year with 32 tackles, including 20 solo stops, with 14.5 tackles for loss, 8.0 sacks, four forced fumbles and nine quarterback hurries. He led the SLC in both QBH and forced fumbles, ranking eighth nationally in both as well.

Fearless Prediction: New coach Mike Schultz takes over the head job in Beaumont—taking over for the departed Ray Woodard for the Cardinals. He comes to Lamar after being TCU’s long time offensive coordinator. The team returns just 12 starters but one up-and-comer might be quarterback Adam Morse, who was thrust into action last year as a freshman due to injuries.

Impact player: WR/RS Zae Giles should provide Morse a venerable target who is also going into just his sophomore season. He caught a team-high 58 passes for 518 yards and four touchdowns last year. He also carried the ball 14 times for 118 yards and a score and returned eight kicks for 204 yards and a touchdown.

Fearless Prediction: After just a two win season, the Wildcat administration released former head coach Ken Collums and was replaced by the current winningest coach in all of the NCAA in former DII Northwest Missouri State headman Adam Dorrel. While at Northwest Missouri State, Dorrel won three national titles in his six seasons there and hopes to bring that winning way to Abilene. He comes at a time when ACU has just become DI playoff eligible and when the school opens its new Wildcat Stadium on campus. The team returns a total of 15 starters to help in the rebuilding.

Fearless Prediction: Demon fans hope the bottom has come and the only place to go is up now. Last year, NSU went winless against DI competition with its lone win coming against DII Kentucky Wesleyan. Coach Jay Thomas is likely on the hotseat in a program that is used to winning. In the off-season, he replaced two new coordinators. Experience should not be an issue, however, as 26 players currently on the team made at least one start last season.

Impact player: WR Bobby Chan-Chan last year ranked 13th nationally with 19.2 yards per catch in his junior season. He led NSU with 32 catches, 614 yards and six touchdown receptions. He was one bright spot on an otherwise dismal season. He was also this spring game’s (Delaney Bowl) MVP and should provide some spark in the Demon offense.

Fearless Prediction: The Cardinals are now SLC championship and FCS playoff eligible. UIW won its last two games last year and hopes to use that as a springboard for success this year. In total, however, UIW won just three contests but Coach Larry Kennan’s squad does return seven starters on offense and eight on defense. One big replacement though will be finding a new signal caller for the graduated Taylor Laird.

Impact player: WR/RS Kody Edwards racked up 712 yards and eight touchdowns on 39 receptions last season. He finished the year ranked in the top 10 in the Southland Conference in receiving yards per game (71.2), scoring touchdowns (eight), 100-yard receiving performances (three), points scored in a game (18) and all-purpose yards per game (112.5). He set a school record with three touchdowns against top ranked at the time Sam Houston, which was the most by any player in the league last season.

Fearless Prediction: The Huskies are coming off a school record for wins—albeit just four but is not bad for just its third season of competitive play. HBU does return eight starters on each side of the ball this year but one big lose will be the graduation of quarterback Tony Dawson so HBU may need some time to grow at least on the offensive side with a new signal caller.

Impact player: LB Garrett Dolan is coming off a steller junior season where he led the league in tackles per game with 12.3 and that mark was good enough for second place nationally. In total, he recorded 135 tackles (47 solo), 15.5 for losses of 60 yards, 2.0 sacks, two forced fumbles, one fumble recovery, three quarterback hurries and three pass breakups. He also tied his own school record with 18 tackles and recovered a fumble in the season-opener at Central Arkansas.