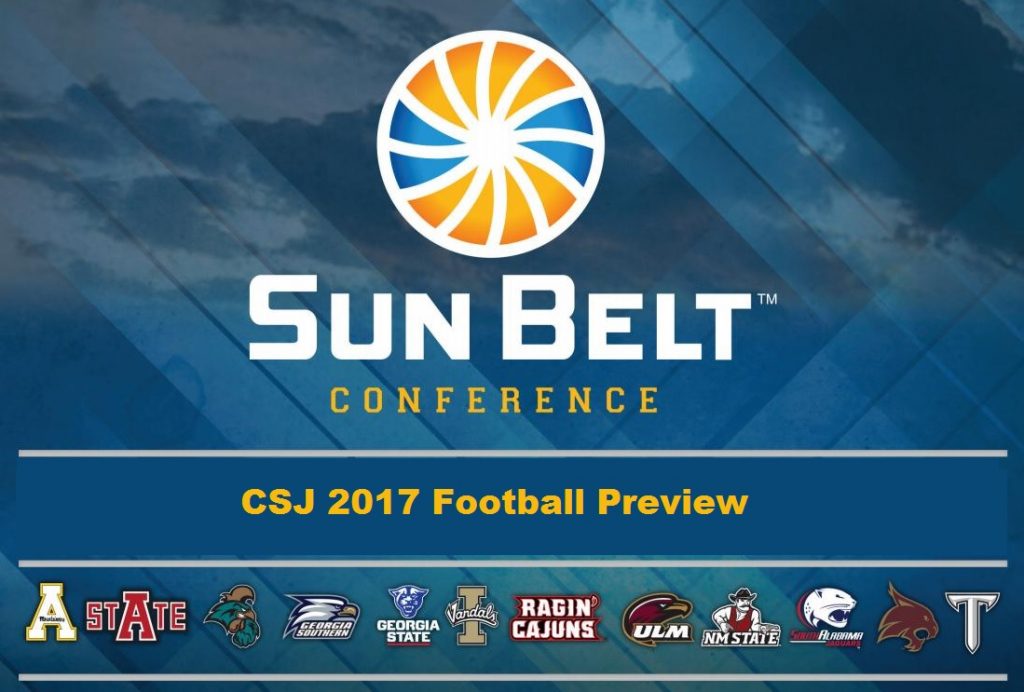 Fearless Forecast: The Mountaineers have a tremendous coach in Scott Satterfield, who is 28-10 in his tenure in Boone which includes two consecutive years of double-digit wins, and two consecutive Camellia Bowl wins. Experienced talent is all around this team with four-year starter Taylor Lamb at quarterback, Jalin Moore at running back and Shaedon Meadors at wide receiver leading a powerful offense that scored over 31 points per game. The Mountaineers also have seven starters back from last year’s SBC co-champions. Look for App State to contend for a New Year’s Six Bowl Game especially if the Mountaineers upset Georgia in its opener—something that is not farfetched as App State nearly upset Tennessee but lost in overtime last year in its season opener.

Impact Player: RB Jalin Moore began the last season as a backup to Marcus Cox, but made six consecutive starts after Cox was injured in the middle of the season. He averaged 107.8 yards per game, leading the league in rushing and 23rd nationally in route to being named as the SBC Offensive Player of the Year. In total, the now-junior had 1,402 yards rushing with a second best in league 10 touchdowns.

Fearless Forecast: The Trojans improved from a four win team in 2015 to ten win team last year in coach Neal Brown’s two season thus far. In his third season, they have nearly all the skilled positions back on offense including quarterback Brandon Silvers, running back Jordon Chunn, and wide outs Emanuel Thompson and Deondre Douglas. Last year, the offense put up 30 points per game so Troy has the potential to be the most potent scoring team this year. The defense has loses five of its top seven tacklers but return six. The Trojans miss App State on the schedule but its final at Arkansas State very well could be a pseudo SBC championship game.

Impact Player: QB Brandon Silvers led the SBC with 23 touchdown passes – four more than anyone else in the league. The now-senior ranked fourth in the league with 244.6 passing yards and third with a 133.05 passer rating. He threw just 12 interceptions on the season, the second fewest by any SBC quarterback with at least 350 attempts. He also threw multiple touchdown passes in each of the first six games of the season and in eight total games.

Fearless Forecast: The Red Wolves have won at least a share of the SBC title in five of the past six years including a share of the title last year with App State. While the team returns just 10 total starters from both side of the ball, quarterback Justice Hansen, a former Oklahoma transfer, should lead the young offense and the defense will have defensive end Ja’Von Rolland-Jones leading the defense and just might be the best player in the league. A-State will be in the race until the end most likely.

Impact Player: DE Ja’Von Rolland-Jones became just the second defensive player in the history of the Sun Belt Conference to be named the league’s Player of the Year last season. The now-senior ranking fifth in the nation in sacks (1.04 per game) and eighth in tackles for loss (1.7 per game) last year. During the course of the year, he broke both the Sun Belt single-season and career records for sacks with 13.5 and 30.5, respectively and also broke the A-State career record for sacks as well, and his 13.5 for the season were only a half-sack shy of tying the most in school history.

The Vandals are now in the last season before moving to the FCS ranks in the Big Sky Conference. While this seemed logical a year ago, Idaho is coming off its best season while playing in the Sun Belt with a 9-4 mark. Coach Paul Petrino’s team picked up the program’s first bowl win in seven years last season and they’ll hope to exit the FBS stage with another bowl appearance. Idaho will be headed by quarterback Matt Linehan and have a star on defense in linebacker Kaden Elliss to lead the respective sides of the ball.

Impact Player: LB Kaden Elliss expand his role as defensive leader and dominating player. The now-junior finished the season with 65 total tackles and was fourth on the team in tackles for loss with eight. He was second in pass interceptions with five, which was fourth in the Sun Belt and 18th nationally and also added two fumble recoveries.

The Jaguars have been very consist since the 2013 season finishing 6-6, 6-7, 5-7, and 6-7 in those seasons. USA enter 2017 under head coach Joey Jones hoping to take a step forward and to break through that six win ceiling they’ve consistently bumped up against the past four seasons. The Jaguars will, however, need to improve by having just 11 total starters back.

Impact Player: S Jeremy Reaves has been a first-team All-Sun Belt Conference pick each of the last two seasons. The now-senior totaled 85 tackles, seven pass break-ups, three interceptions and two forced fumbles last year. He is on the watch list for the Jim Thorpe Award, given annually to the top defensive back in college football and was also named to the watch list for the Bronko Nagurski Trophy, an award for best overall defensive player.

Fearless Forecast: The triple option didn’t exactly go away, but it wasn’t as dominant as it has been in year one for Coach Tyson Summers. Looking back, the Eagles stormed onto the scene at the FBS level with back-to-back nine win seasons under Willie Fritz in 2014 and 2015. That included the program’s first ever bowl victory. Fritz left to take over the reins at Tulane and Summers took over to only finish a disappointing 5-7 last year. The team looked to the passing game last year in what seemed like too much and will go back to the option running attack more this season to get back to its roots. Despite only 10 starters back, the Eagles are likely to improve and very well could see a bowl game.

Impact Player: S Joshua Moon was third on the team in tackles with 72 and had 2.5 for loss. The now-junior had a fumble recovery against Louisiana, as well as an interception against both Arkansas State and New Mexico State. He also recorded 10+ tackles against Louisiana and Ole Miss.

The Ragin’ Cajuns have had a number of the suspensions and off-field issues before the season this year. After four straight 9-4 seasons including wins in the New Orleans Bowl from 2011-2014, Coach Mark Hudspeth’s team has taken a step back the past two years. A 4-8 record in 2015 followed up by a 6-7 record and their first ever loss in the New Orleans Bowl last year. This season, Louisiana is breaking in pretty much all of its offensive skill position players but this team will have an experienced offensive line to build around. On defense, they’ll look to replace two major pieces after the departures of LBs Otha Peters and Tre’maine Lightfoot.

Impact Player: DE Joe Dillon was named to a number of All-Freshman All-American teams and was the SBC Freshman of the Year after last season and could put up even better numbers this year. He is coming off a season where he stared just eight startbut still led the Ragin’ Cajuns in tackles for loss (12.5) and sacks (7.0).

Fearless Forecast: The Warhawks broke in its first year under Coach Matt Viator and finished a difficult season at just 4-8. Starting quarterback Garrett Smith was hurt in Week 6 and forced two freshmen into rotating duties. Smith returns from injury with plenty of options at running back and a solid line. The defense was the area of concern, however, (39.1 PPG, 480 YPG) last season but those young players did get experience so ULM very well could improve on that four win season.

Impact Player: LB David Griffith should lead to an improving defense this year for the Warhawks. The now-junior recorded at least three tackles in every game, including three-games with double-digit tackles and a career-high 14 total tackles. He is very quick and very athletic, he fit the new 4-2-5 scheme the team employed well.

Fearless Forecast: Like Idaho, NMSU enters its last season in the SBC and hopes to improve from a 3-9 campaign. But unlike Idaho, the Aggies will go to a FBS independent in 2018. The offense will have running back Larry Rose III and quarterback Tyler Rogers back from injury to both lead this side of the ball. The defense gave up over 38 points per game so how the Aggies improve will likely be from this side of the ball.

Impact Player: RB Larry Rose III led the team with 865 rushing yards for an average of 5.4 per carry despite missing the first three games with an injury. The now-senior tied for the team lead with four touchdowns on the ground and averaged 96 yards rushing per game.

Fearless Forecast: The Panthers will break in a new coaching staff and also new stadium—the former Atlanta Braves and 1996 Olympic Stadium. The Panthers bring in a new head coach after a disappointing 3-9 season, as Shawn Elliott takes the spot. Elliott is known largely for his stint as interim head coach at South Carolina after Steve Spurrier’s surprise in-season retirement two years ago. He was the offensive line coach for the Gamecocks before and after that stretch and he’ll have an experienced offensive line with GSU and several key skill positions. The defense will have a good secondary but will need to improve on stopping the run.

Impact Player: WR Penny Hart was a Freshman All-American and Sun Belt Freshman of the Year in 2015. The now-sophomore, however, missed most of 2016 with a season-ending foot injury, taking a medical redshirt year. He is back to full strength now and should provide a spark on offense. In 2015, he led the Sun Belt in receptions (5.5 pg) and receiving yards (84.5 pg) while ranking third with eight touchdown receptions.

In Coach Everett Withers first season in San Marcos, the season was definitely a rebuilding season and the Bobcats finished just 2-10. The quarterback situation was supposed to stronger with Mississippi State transfer Damian Williams taking this spot but he got suspended in the off season. TSU should be better despite a freshman taking the signal calling duties but probably not significantly better especially on defense.

It’s the first season in the FBS ranks for the Chanticleers. Coastal has a great coach in Joe Moglia, who was a stable in the FCS playoffs over the past several seasons. But I believe it will be tough for this team in the new conference to win but will likely be competitive in many contests. Overall just ten starters return so that inexperience will not lend itself to finishing strong in a new league.

Impact Player: WR/RS Chris Jones enters 2017 11th among active NCAA Division I (both FBS and FCS) players with a career punt return average of 11.9. The now senior ranks second on the CCU all-time list for punt return yards (498) and punt returns (42). He is also just the ninth Chanticleer to reach 1,000 career receiving yards (1,024).