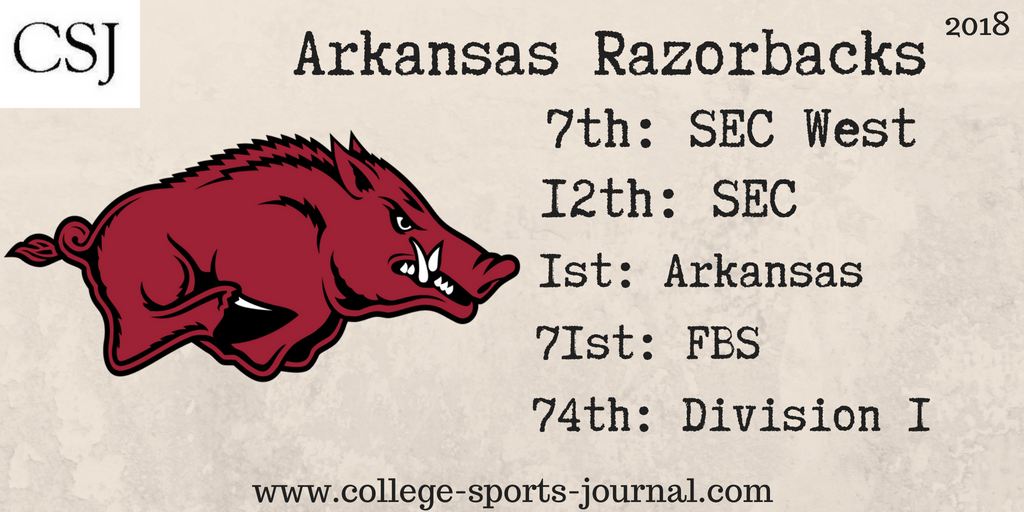 2017 In A Sentence: After five years under Coach Bret Bielema, Arkansas decided to go another direction especially after last season’s 4-8 record and just 1-7 in SEC play,included losing its last three SEC contests.

Biggest Shoes to Fill: OC Frank Ragnow was an All-American and the nation’s top-graded center by Pro Football Focus each of the last two seasons. He was a three-year starter for the Razorbacks and team captain as a senior.He played in 42 games with 33 consecutive starts, participating in 2,603 snaps and never allowing a sack. He was selected 20th overall in the first round of the NFL Draft by the Detroit Lions.

Key Player: Junior TE Austin Cantrell (along with senior Jeremy Patton) will be a key target especially given the team is a light short on wide receivers for whomever the Arkansas quarterback (still a five-way battle between sophomore Cole Kelly, junior Ty Sorety and three other freshman). Cantrell is coming off a 13 reception, 85 yard performance last year but tight ends are more of a key position in new Coach Chad Morris’ attack.

Fearless Prediction: The defense is switching to a 4-3 alignment and with the issues at the quarterback, it is hard to imagine that the Razorbacks will improve by much over the four-win total they had last year.