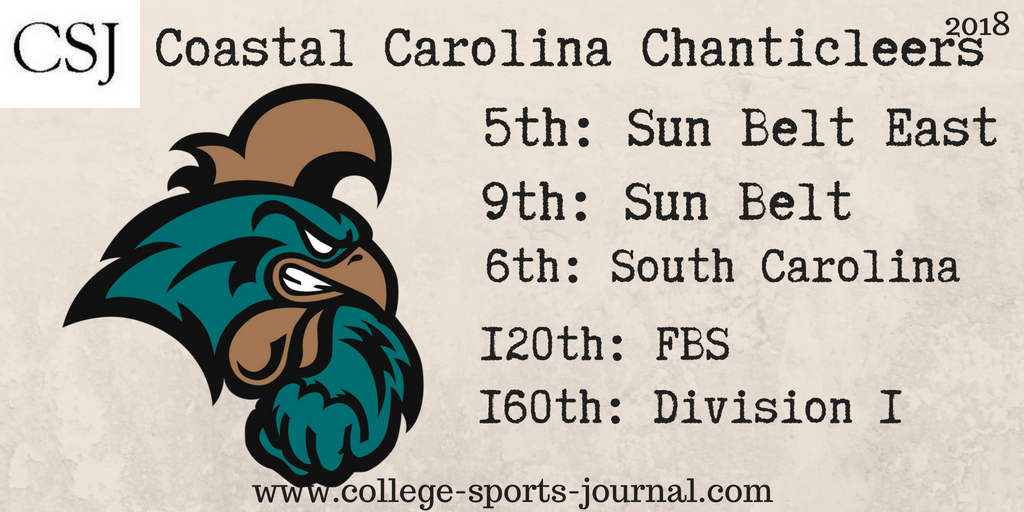 2017 In A Sentence: After a season-opening win over UMass, Coastal Carolina endured nine consecutive losses (but none by more than 8 points) and the Chanticleers went 1-5 in games decided one touchdown or less while Coach Moglia was out all of the season due to health reasons (allergic reaction in his lungs) but did win its last two to finish 3-9 overall.

Biggest Shoes to Fill: RB Osharmar Abercrombie was the leading rusher for Coastal last year. He tallied 724 yards on the ground and scored seven times. His 5.68 yards per rush for career ranks sixth on the CCU all-time list. Abercrombie stands fourth on the school’s all-time list for rushing touchdowns (22), fifth in rushing yards (1,922), 10th in all-purpose yards (2,372) and 10th in points scored (138).

Key Player: QB Kilton Anderson came to Conway from junior college last year and sat on the bench for the most are until the last three games of the season but did see some some action in three others. The now-senior finished the season as the starter and went 2-1 in that role. In just six games at CCU, Anderson already ranks seventh on the school’s all-time list for passing yards (743), seventh in passing TDs (7) and eighth for completions (49).

Fearless Prediction: With Coach Moglia back, Coastal hopes to get back into the winning ways in had at the FCS level. Now the FBS transition is over and the Chanticleers are bowl eligible. That might be a lofty goal to get to the six win mark but the coach may make the difference to turn the close losses into wins and get there.