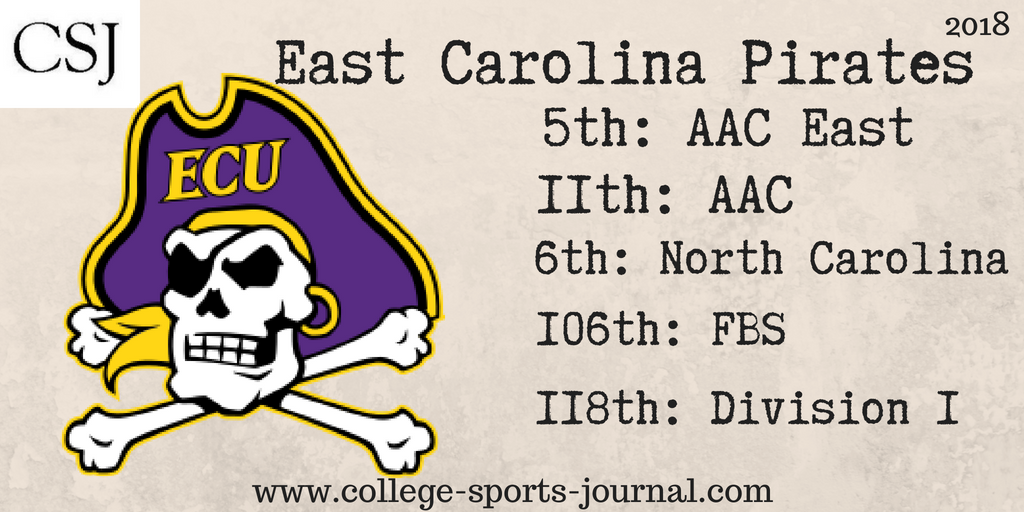 2017 In A Sentence: The Pirates finished the season just as they did in 2016 with a 3-9 record on a team that produced well on offense through the air, while the defense was very porous in giving up over 540 yards per game on average.

Biggest Shoes to Fill: QB Gardner Minshew departed this past spring before what would be his senior season for the Pirates due to a family matter in his home state of Mississippi. He started five of 10 games last year and led ECU in completions (174), attempts (304), passing yards (2,140) and passing touchdowns (16) as a junior. Minshew established school and AAC single-game records with a 52-of-68, 463-yard performance at Houston.

Key Player: WR Trevon Brown will be a key component in the passing game for whichever quarterback (likely either sophomore Reid Herring or freshman Holton Ahlers) takes snaps for ECU. The now-senior led the team with 60 receptions and 1,069 yards with seven touchdowns. He is unique and has NFL scouts all over him with his ability to both be a deep threat and possession type of receiver.

Fearless Prediction: The Pirates passing attack will be the strength of its offense. To improve, however, ECU needs to get a semblance of a running game. It also needs a complete turnover to improve on defense if this team wants to do better than three wins. Given just ten returning in total, this seems very far-fetched to expect to get this kind of change.