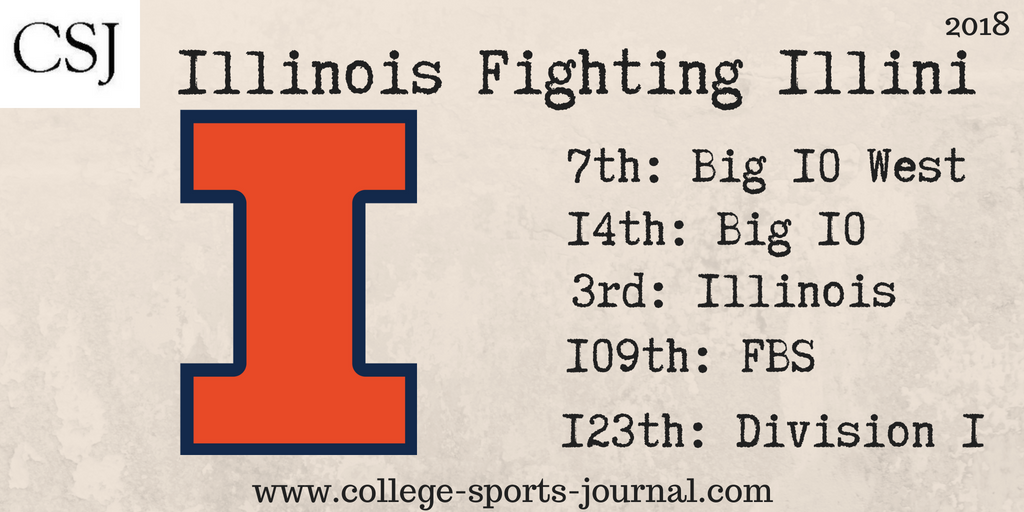 2017 In A Sentence: The Illini had 31 first-time starters last season, which was the second-most in the entire country to slump to a 2-10 overall record and went winless within Big 10 play.

Biggest Shoes to Fill: DE/OLB James Crawford was a team captain and leader on the Illini defense. He had 26 tackles, team-high 5.5 TFLs, team-high 4.0 sacks, 4 PBUs, 4 QB hurries, 3 forced fumbles & 2 fumble recoveries in 2017. He was signed as a college free agent this spring with the NFL’s Baltimore Ravens.

Key Player: TE Louis Dorsey will be a key receiver for whichever quarterback is playing . He had 22 catches for 395 yards and three touchdowns during his true-freshman season in 2017. His 18.0 yards per catch would have led all FBS true-freshmen, but his 1.83 receptions per game fall just short of the NCAA minimum (2.0). Dorsey’s 77-yard TD reception against Indiana is the longest reception by a true-freshman in Illinois history and his 107 yard game against the Hoosiers were the most by a true-freshman tight end in program history.

Fearless Prediction: Coach Smith came to Illinois with a lot of fanfare after being the NFL head coach of the Chicago Bears and Tampa Bay Buccaneers. He led the Bears to a Super Bowl appearance following the 2006 season. That kind of NFL success has yet to translate to the college game so far. He reshuffled his assistants this year and with 31 first time starters last year, this year’s team will have experience. This year will likely be better than two wins but probably not by much.