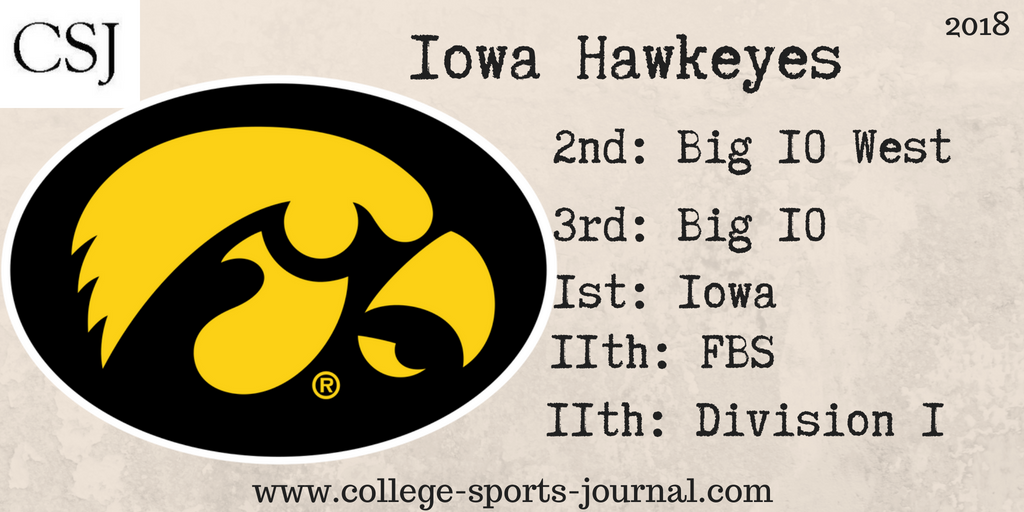 2017 In A Sentence: The Hawkeyes finished 2017 just 8-5 overall but four of its five losses were by eight points or less but it did see a blowout win over Ohio State and ended the season with a Pinstripe Bowl victory over Boston College.

Biggest Shoes to Fill: CB Josh Jackson led all of FBS in interceptions last year with eight and he returned two of those for scores. He was as named Big Ten Defensive Back of the Year and a finalist for the Jim Thorpe Award. He decided to forgo his senior season and entered the NFL Draft, where he was picked in the second round by the Green Bay Packers.

Key Player: QB Nate Stanley threw for 26 touchdowns in his first year as the Hawkeye starter last year, which was just one shy of the all-time Iowa record. The now-junior completed, however, just 55.8 percent of his passes so this is the area that will need to improve for the Hawkeyes to be a more consistent team.

Fearless Prediction: The Big 10 West has been either Wisconsin’s or Iowa’s in the past three years with the Hawkeyes getting one of those three division titles. The Hawkeyes get Wisconsin as the Big 10 opener in Iowa City in what might be an early Division title game. The Hawkeyes also avoid East Division heavyweights this year in Ohio State, Michigan, and Michigan State so this team looks like it will challenge not only for the Big 10 West but may also be in the running for a full Big 10 championship.