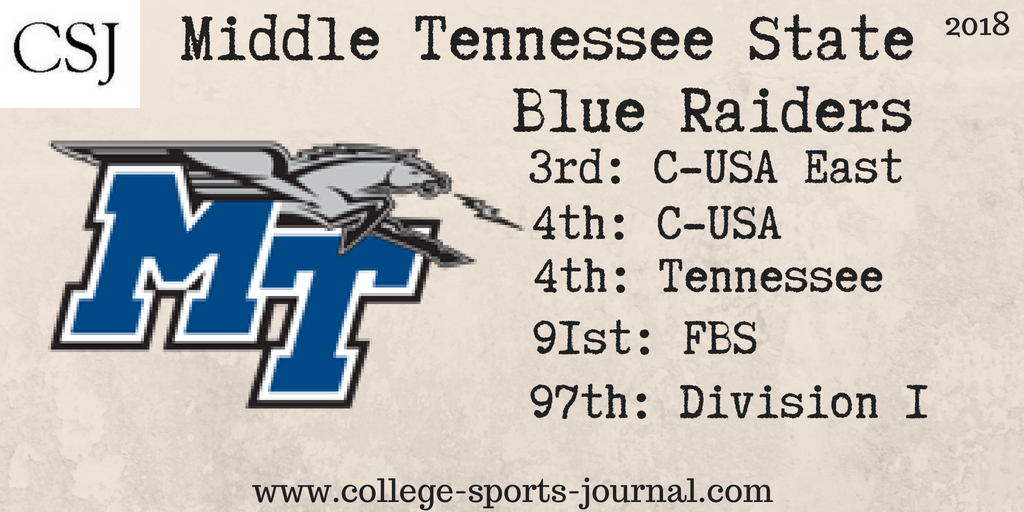 2017 In A Sentence: MTSU looked as if it could have had a very special season to start but injuries in the middle of the season caused it to be average but still won four of its last five contests including a Camellia Bowl win over Arkansas State to finish 7-6 overall.

Biggest Shoes to Fill: WR Richie James played in five games, catching 31 passes for 290 yards and three touchdowns last year. However, he broke his collarbone against Marshall and was ruled out for the season. During his limited playing time in 2017, James became Middle Tennessee’s career leader in receiving yards (3,261) and receiving touchdowns (23). After the season, James declared for the 2018 NFL Draft and was selected in the 7th Round by the San Francisco 49ers. Key Player: QB Brent Stockstill was the key to the Blue Raider success last year as the team went just 2-4 without him after he cracked his sternum and had a separated shoulder. He threw for 1,672 yards and 16 touchdowns and will look to stay healthy in 2018 to lead his team in his senior season.

Fearless Prediction: MSTU will have three road out-of-conference contests against SEC opponents so it will need to overcome this difficult stretch. But with a fairly strong defense returning and with some luck on staying healthy, this team will again see a bowl game.