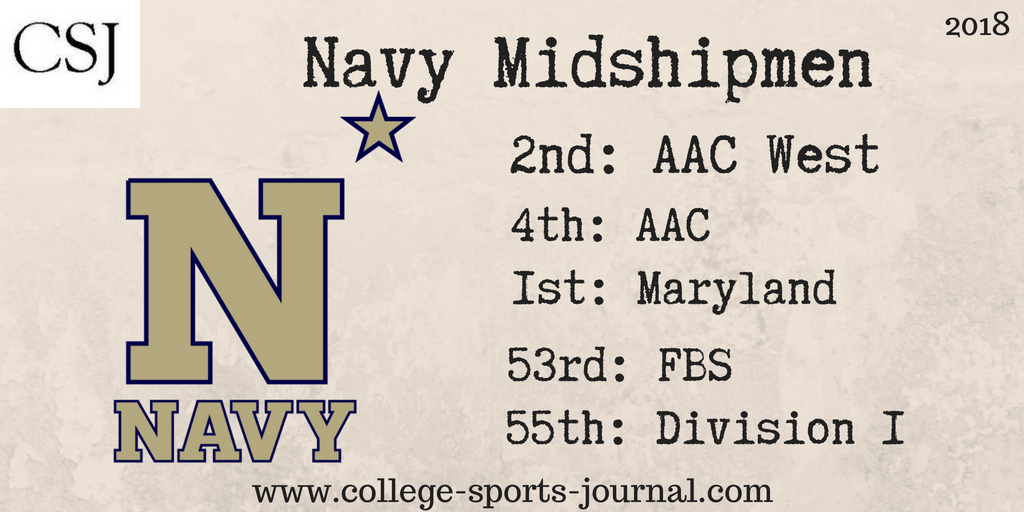 2017 In A Sentence: A promising 5-0 start ended terribly for the Midshipmen, losing five of their next six regular-season games and losing heartbreaker after hearbreaker, cumulating with their second straight loss to their bitter Rival Army, 24-14. An above-.500 season was somewhat salvaged with a resounding 49-7 win against Virginia in the Military Bowl, however.

Biggest Shoes to Fill: Co-captain LB D.J. Palmore led the Midshipmen in tackles for loss with 12 1/2 on the season and helped Navy have a stout rushing defense on the year. His leadership and tackling will be missed.

Key Player: QB Zach Abey was Navy’s leading rusher in the Niumataolo triple-option offense quth 1,418 yards and 19 TDs, and he returns for his senior season to lead the Midshipmen once again. His experience running the offense will be a huge asset as Navy hopes to expand on their offense that averaged more than 30 points per game.

Fearless Prediction: Navy’s big weakness was pass defense last season, and it’s a weakness that will continue to be exploited as long as Niumataolo’s defense exhibits that weakness. If they find a decent pass defense, they could absolutely make a run at the AAC Championship game.