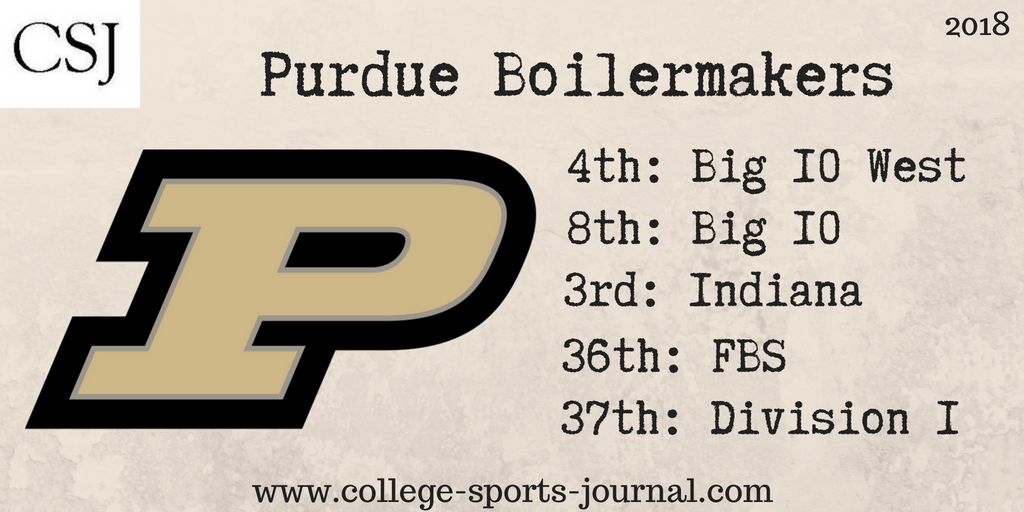 2017 In A Sentence: In what was supposed to be a rebuilding season with new Coach Jeff Brohm, Purdue instead finished 7-6 overall including a Foster Farms Bowl win over Arizona State.

Biggest Shoes to Fill: LB Ja’Whaun Louis Bentley recorded 97 tackles including 11.5 for loss last year in being named to the All-Big 10 Honorable Mention team. He registered 272 tackles over the course of his career and is one of seven starting defenders the Boilers lost from last year. He was selected in the 6th round of the NFL Draft by the New England Patriots.

Key Player: QB David Blough or Elijah Sindelar were both starters last year and both are coming off injuries. Blough will be a senior this year and was the starter until he had a dislocated ankle in early November sidelined him the rest of the season. Sindelar will be a junior this year and started the last four games and played with a torn ACL the last three. Neither has been named the starter as of yet and actually both are expected to be healthy to start the season. Whichever quarterback is selected, he will expected to produce more than the 25 point average it produced last year with a youthful defense on the other side.

Fearless Prediction: With just a total of 11 starters back, Purdue will need some younger performers to step forward. Expect the Boilermakers to take a step back but likely will narrowly win enough to get to a bowl game.