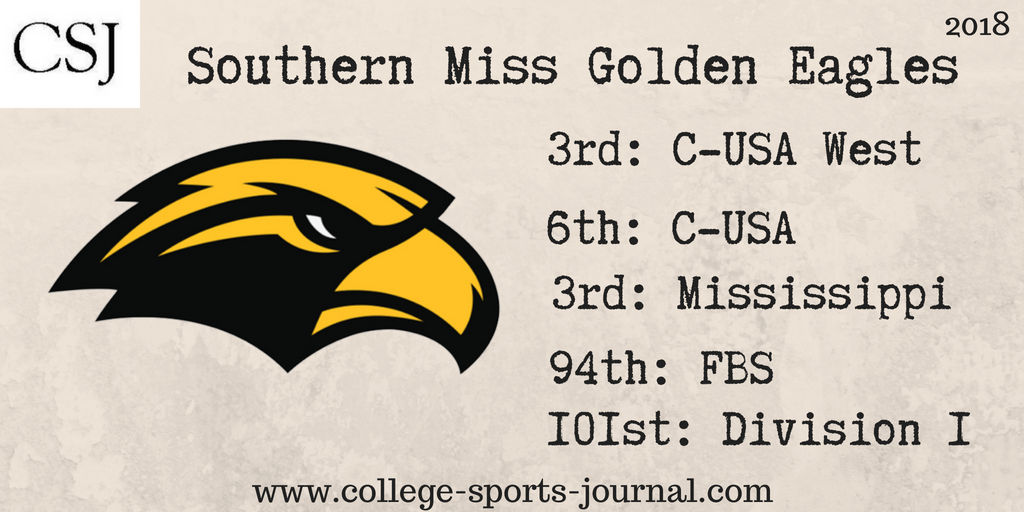 2017 In A Sentence: Southern Miss finished just about where so called experts picked the Golden Eagles–tied for 2nd in the C-USA West Division and wound up going to the Independence Bowl but were overmatched against Florida State to finish the season 8-5 overall.

Biggest Shoes to Fill: QB Kwadra Griggs, who started seven games last season, was suspended indefinitely by the team just now weeks before the regular season in what was called a “student conduct matter.” Griggs would be a senior this year and was the most consistent of the quarterbacks last year. He threw for 1,879 yards with 16 touchdowns and two interceptions last season, while rushing for 270 yards and three more scores and was also coming off an offseason Achilles surgery.

Key Player: With Griggs seemingly gone for the season, the key player fr USM will be QB Jack Abraham in his redshirt sophomore season. Abraham had been pressing Griggs for the starting spot in the spring and into the start of fall camp but all signs pointed that Griggs would retain the starting spot. Abraham comes to Southern Miss from Northwest Mississippi CC where he threw for 2,949 yards and 214-of-337 throws with 23 touchdown passes and only eight interceptions last season.

Fearless Prediction: The Golden Eagles bring back much on the 2nd best statistical defense (331.9 yards/game) so that strength will keep them in games. If it can get enough play out of its quarterback position, this team will again go bowling.