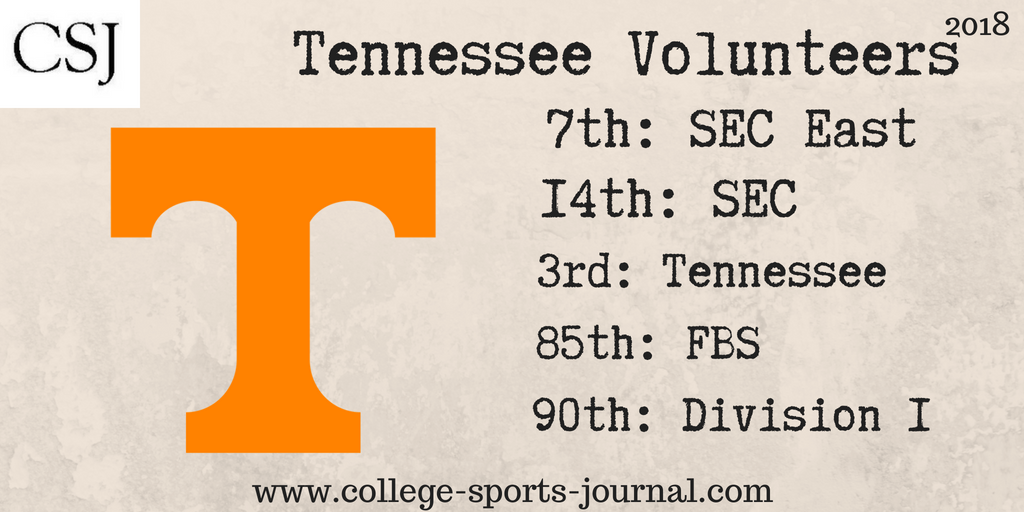 2017 In A Sentence: There is no way to put the Tennessee season but state it was a disaster although it started 3-1 but finished 1-7 to cost Coach Butch Davis his job with the Vols finishing just 4-8 overall.

Biggest Shoes to Fill: DB Rashaan Gaulden proved his versatility by playing at nearly every spot in the defensive backfield. He finished with 140 tackles, including 9.5 for loss, over 36 games with 19 starts. He had a breakout 2017 season, where he totaled 65 tackles to go along with three forced fumbles, three fumble recoveries, six passes defended and one interception. He was a 3rd round NFL Draft selection of the Carolina Panthers.

Key Player: OL Trey Smith was the nation’s top freshman offensive lineman in 2017, starting every game for the Vols and capturing FWAA Freshman All-American Team accolades in addition to All-SEC Second Team and All-Freshman honors by the coaches and media. earned playing time at right guard, left guard, left tackle and right tackle last fall. He became the first Vol true freshman to start at left tackle in over 30 years when he protected the blind side against Southern Miss on Nov. 4. Smith led the Vols with 55 knockdowns and finished as the SEC’s top-rated freshman offensive player according to Pro Football Focus College.

Fearless Prediction: The big key for Tennessee is to improve on the defensive side as it gave up 5.4 yards per rush last year. The offense will get a kickstart with the grad transfer of QB Keller Chryst, who started six games for Stanford last year. If new coach Pruitt can use his defensive schemes from Alabama (where he was the defensive coordinator), the Vols will improve but it likely will take more than this year to see the results.