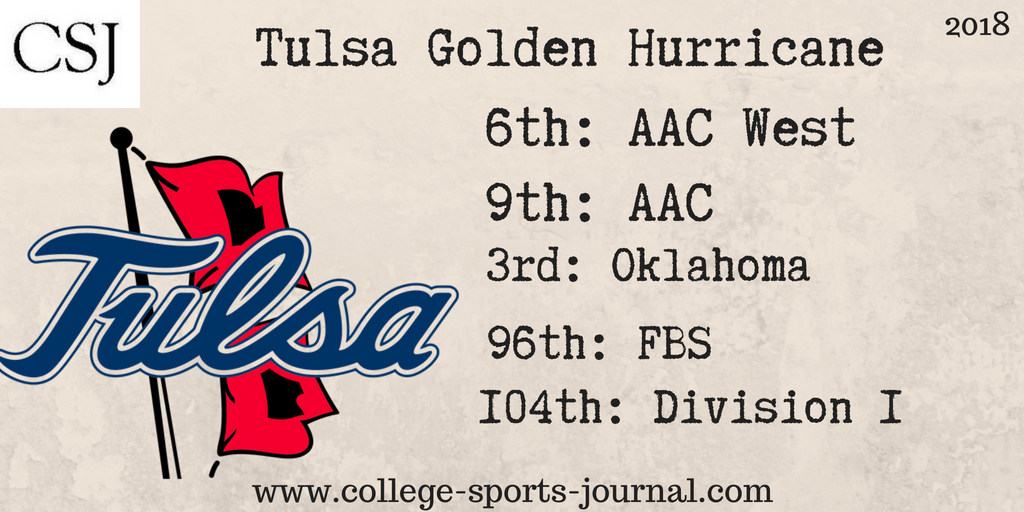 2017 In A Sentence: Just one year after an incredible 10-3 season, Tulsa fell hard in 2017 in slumping to a 2-10 record, which was the worst overall record in the AAC but lost five of the ten losses came down to the final possession.

Biggest Shoes to Fill: RB D’Angelo Brewer led the AACwith 1,517 yards for a 137.9-yard per game average. He had eight 100-yard rushing games this season, including two 200+ yard games with 262 yards against Louisiana and 255 yards vs. Temple. Brewer completed his career with a school record 3,917 yards, 23 touchdowns and a school record 17 100+ rushing games. Key Player: QB Luke Skipper emerged in the second half of the season as the Golden Hurricane (over sophomore Chad President). Skipper ended the year with an impressive average of 9.0 yards per attempt (compared to 5.9 for President). The Tulsa quarterback development (whichever emerges) will be key to success.

Fearless Prediction: The defense was another area of concern in 2017 (gave up 528.9 yards per game) so a number of junior college transfers have been brought into booster this side of the ball. With so many new faces and inexperience it is hard to imagine Tulsa getting to bowl eligibility but just as going from 10 wins to 10 losses from one season to the next, maybe the Golden Hurricane can yo-yo the other way this year.