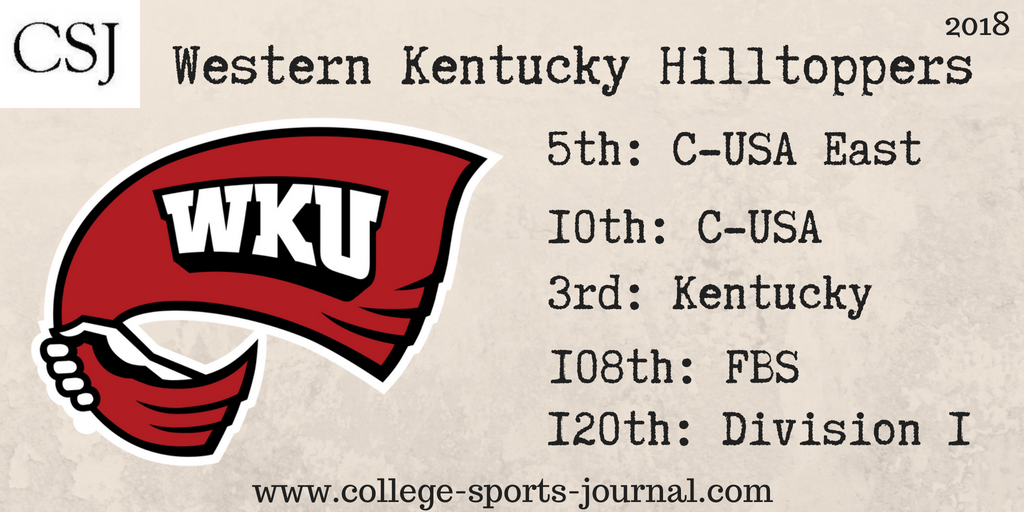 2017 In A Sentence: In a transitional season under new Coach Sanford, WKU still managed a six-win season and a bowl appearance in the Cure Bowl but lost that game to Georgia State to finish with its first losing season (6-7) in seven years.

Biggest Shoes to Fill: QB Mike White set school records for passing attempts in a season (560, 2017), passer rating in a season (181.4, 2016), passer rating in a game (306.2, 2016) and won 17 games as the starter. Elsewhere, White is statistically second or third in every major passing category. During his first year as the starter, White led the nation’s most potent scoring attack, setting a school record for point scored at 637 and average per game at 45.5. He was drafted in the fifth round of the NFL Draft by the Dallas Cowboys.

Key Player: QB Drew Eckels will bring more of the Coach Sanford attack that emphasizes more of a running attack. He will look to improve on the team mark that averaged an FBS worst 60.8 yards per game. The now-senior saw limited action last year–seeing action in eight games and completed 8-of-11 pass attempts for 86 yards and as a change of pace mobile signal caller. He rushed 12 times for 27 yards.

Fearless Prediction: WKU has a solid defense with seven returning starters but with Eckels and six other new starters on offense, the key will be how well the new more run orientated offense will gel. If the offense can at win the time of possession and score enough, this team could exceed the six win total. If not, it may be a long season for Hilltopper faithful.