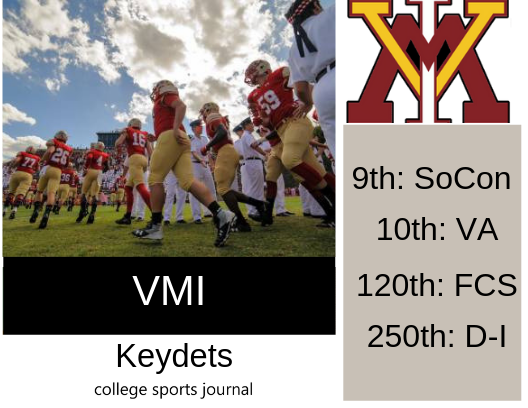 2018 In A Sentence: On November 3rd, the Keydets downed D-II Tusculum 20-11, snapping a 25 game losing streak that dated from 2016. The 1-10 record obscures the fact that VMI gave some major scares to its SoCon opponents, including East Tennessee State, Western Carolina, and VMI’s historic rival The Citadel.

Biggest Shoes to Fill: DB Uzoma Kpaduwa had 77 tackles, 4 1/2 TFL and 2 sacks in his final year as a Keydet. He was one of the better defenders VMI had last season.

Key Player: He was very inconsistent last season, but QB Reese Udinski showed some flashes of brilliance last season that kept the Keydets competitive in more games. Udinski’s 49/64, 5 passing touchdown performance vs. The Citadel was a glimpse of what he can do with VMI’s pass-happy offense, but can he deliver such results consistently?

Fearless Prediction: With D-II Mars Hill and Robert Morris on the schedule, the Keydets look like they will have a very good chance to improve on their 1-10 record from last year. But unless the defense improves and the offense gets more consistent, it’s hard to picture them getting above .500.