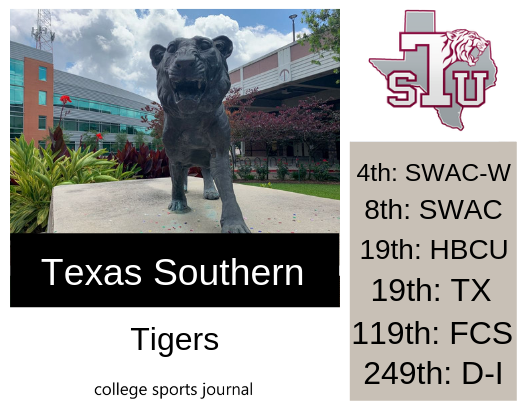 2018 In A Sentence: Following a humiliating 60-14 loss to Prairie View A&M to close out a dismal 2-9 season, three year head coach Michael Haywood resigned and Clarence McKinney, who had served as Associate Head Coach and running backs Coach at Arizona, was hired to replace him.

Biggest Shoes to Fill: WR Bobby Hartzog was selected to the All-SWAC First Team and averaged a league leading 127.5 receiving yards per game. He caught 56 passes for 1,020 yards, seven touchdowns and averaged 18.2 yards per reception, and was the Tigers’ only true threat offensively.

Key Player: QB DeAndre Johnson comes to Texas Southern after a season at Florida Atlantic. The highly-traveled QB was featured on “Last Chance U” when he transferred from Florida State to East Mississippi Community College. His presence provides star power to the Tiger program, but also continues Johnson’s soap opera at his 4th college football program in 5 years. How Texas Southern navigates the drama will be the key to their season.

Fearless Prediction: McKinney has a significant rebuilding job on his hands, but a light schedule with D-II Missouri S&T and a road game against Houston Baptist should provide some good opportunities for McKinney to get his first wins as the head man at TSU. If McKinney can finally get Johnson to consistently provide his obvious talent for the Tiger offense, Texas Southern could possibly be a sleeper to challenge the top teams in SWAC West.