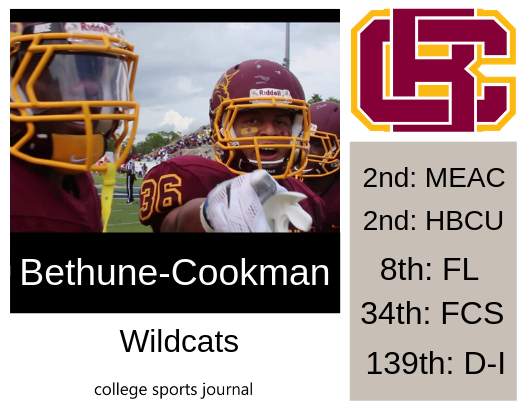 2018 In A Sentence: Bethune Cookman ended the season on a strong note, wrapping up their season at 8-4. Winning almost all the games they were supposed to, they’ll look back at an early season loss to Howard at home and wonder what might have been.

Biggest Shoes to Fill: While WR Keavon Mitchell did not have eye popping numbers in terms of yardage at the end of the season, he was the most proficient and well balanced receiver they had and led the Wildcats with 6 touchdowns. With all the other stats spread out pretty evenly among returning receivers, Bethune Cookman will need someone to set themselves apart from the pack.

Key Player: QB Akevious Williams will need to have a breakout season if the Wildcats hope to make any noise and challenge for a MEAC title this year. While his numbers only reflect 9 games played, he’ll want to up his overall yards per game and show his coaches that he can handle more attempts. He’ll have a well balanced receiving core coming back, but he needs to find a go-to wide out during training camp and show opponents that the Bethune Cookman passing attack needs to be taken seriously.

Fearless Prediction: Having only 4 home games and all of their hardest games on the road, the fact that I have the Wildcats in 2nd for my preseason predictions is pretty bold in it of itself. They need to win all the games they are supposed to win this year and their away game vs. North Carolina Central could be make or break for both teams. I’m still confident that the Wildcats will finish 2nd in an overall improved MEAC – including another win over Florida A&M in the Florida Classic – but it’s not going to be easy.