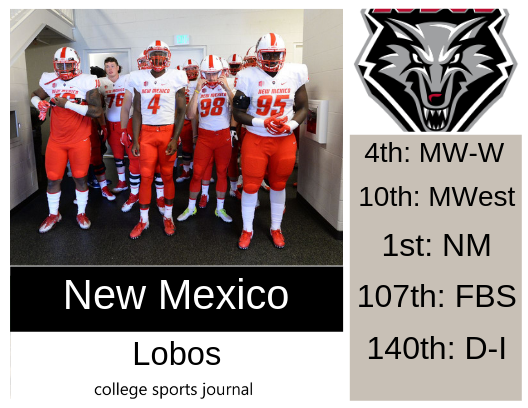 2018 in a Sentence: After an off-season suspension on allegations that he physically assaulted players last year, Coach Bob Davie remained on the job but finished with his second straight 3-9 season (1-7 MWC).

Biggest Shoes to Fill: CB D’Angelo Ross started 23 of 24 games in his career and was tied for third on the team in 2018 with 57 tackles, including two for loss. He tied for the team lead in pass break ups with six. He was signed by the NFL’s New England Patriots to a college free agent in the off season. He is also one of 10 missing starters on the defensive side so there are a number of holes to fill on this side of the ball.

Key Player: The QB position will be the key position in naming a starter. The Lobos have four signal-callers vying for the starting job. Tevaka Tuioti who started several games before injuries forced him to miss most of the season. Sheriron Jones came in his relief and had success moving the ball, throwing for over 300 yards and 4 touchdowns as the Lobos nearly made a dramatic come back in their homecoming game. Redshirt-freshman Trae Hall and JUCO transfer Brandt Hughes are also in the mix. A starter is not expected to be named until late in fall camp.

Fearless Prediction: New Mexico is a big question mark as Coach Davie brought in 20 JUCO transfers this year as well as new coordinators–Joe Dailey on offense and Jordan Peterson on defense. These moves were likely due to Davie being on the hotseat to stay in Albuquerque. Expect an improving team this year, especially as the season goes on and the Lobos to get near the six-win total. The question then will be if that is enough to save Coach Davie’s job.