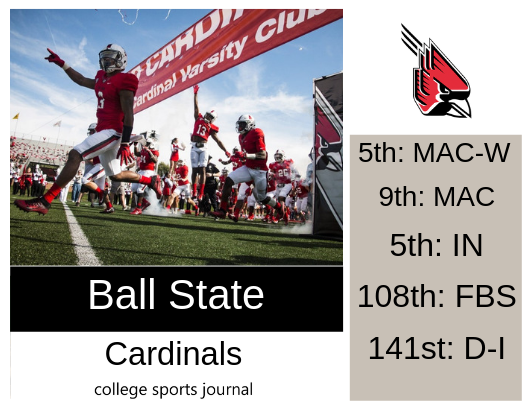 Biggest Shoes to Fill: QB Riley Neal became a graduate transfer to the SEC’s Vanderbilt after playing in 34 games at Ball State. He was a source of consistency for nearly four years, totaling almost 7,400 passing yards at a 60% completion rate and 46 passing touchdowns.

Key Player: WR Riley Miller was a former walk-on that saw a huge increase in production in his second season last year. He more than doubling his receiving yard total from 300 to 878. He will likely be new starting QB Drew Plitt’s security blanket as he finds his footing under center. Miller caught five passes in eight of 11 games last year and

Fearless Prediction: The defense is the area that needs to improve as it finished 11th in the conference allowing 450 yards and 32 points per game last year. Nine starters back on that side of the ball should improve that mark. Now, the offense which lost its two star performers in QB Neal and RB James Gilbert (to Kansas State) to graduate transfers will need to rebuild its speciality positions (although having the entire starting offensive line will help). That scenerio seems like a wash and expect the Cardinals to finish right around where they did last year.