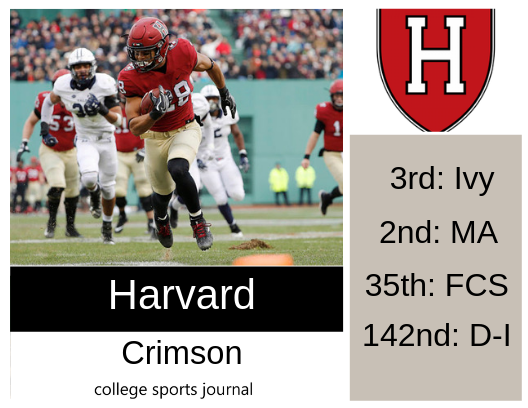 2018 In A Sentence: A season that seemed like it was going off the rails in October was righted in November, with a three game winning streak and a sweet 45-27 win over their hated Rival Yale at Fenway Park clinching a winning campaign. It was the 135th meeting between the two bitter rivals.

Biggest Shoes to Fill: WR/RS Justice Shelton-Moseley was poised to have a senior season to cap off a stellar football career at Harvard, but a leg injury on a punt return in Week 4 meant he ended his Ivy League football career on a tough note. The good news is Shelton-Moseley was able to graduate and was accepted at Vanderbilt, allowing him to play his final year of eligibility at a Power 5 school, but the truth is he was a dynamic playmaker on offense and special teams that will be missed.

Key Player: Sophomore RB Aaron Shampklin emerged in the wake of Shelton-Moseley’s injury to help get the ship righted in mid-season and re-establish Harvard as a title thread in years to come. In 10 games he rushed for 1,053 yards and 9 touchdowns, with a five game stretch of scoring at least one rushing touchdown. The threat of his rushing ability makes the entire Harvard offense better, and he should only improve on his stellar sophomore season.

Fearless Prediction: It truly feels like a corner has been turned after a couple of years of Crimson struggles to get back on top in the Ivy League. A winning season seems likely for the Crimson and longtime head coach Tim Murphy, but the question is whether they are up to the challenge of defeating hated rivals Princeton and Yale as well. With a few good breaks – and a new starting quarterback to replace QB Tom Stewart – they could, but it feels like they need a more than a couple of pieces of the puzzle to come together first.