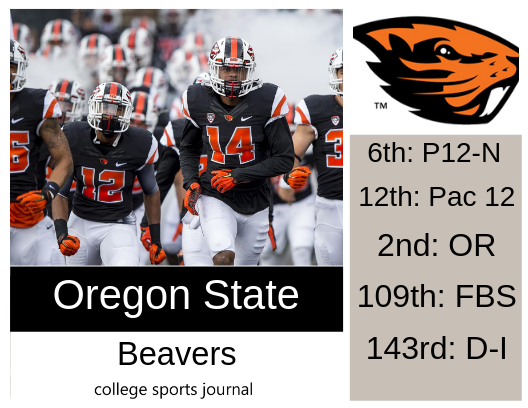 2018 in a Sentence: Most of the Beavers’ 2018 season was downright ugly, with a plethora of double digit blowout losses in a dismal 2-10 campaign. Their lone bright spot was a surprising 41-34 overtime win over Colorado in Boulder.

Biggest Shoes to Fill: Head coach Jonathan Smith has pretty much almost everyone who suited up for him for last year, but that’s not saying much. Last year, Oregon State was the only Power 5 school to not have a single player drafted or signed as an undrafted free agent. In order to become competitive again, Smith has been pulling in transfers left and right.

Key Player: One bright spot for the Beavers was the freshman Pac-12 Rookie of the Year, RB Jermar Jefferson. Thrown into the fire pit early, he responded with 1,380 yards rushing, with seven 100 yard games and 12 TDs, though eight of those were scored in two contests (vs. Southern Utah and Washington State). His development will be critical as the Beavers’ moribund defense tries to develop into a halfway-decent unit.

Fearless Prediction: Frankly, the dearth of talent at Oregon State following the departure of former head coach Gary Andersen in 2017 was downright shocking, though their two win season last year was about in line with predictions. This year promises to be another year of lumps unless Smith’s many defensive transfers can equal a deep infusion of talent, fast. Even if it does come together somewhat, bowl eligibility seems like a tall order.