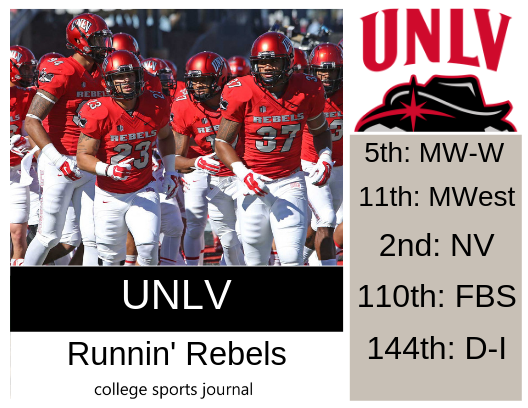 2018 in a Sentence: After three years of improvement in the win column, UNLV suffered a major QB injury and the Rebels dipped to just 4-8 overall (2-6 MWC).

Biggest Shoes to Fill: RB Lexington “Lightning Thomas rushed for 1,067 yards and 12 touchdowns in 2018 while adding a career-high 19 catches for 165 receiving yards. Thomas broke multiple long-standing school records, including most rushing touchdowns in a career (40), most TDs scored overall (43) and most 100-yard rushing games (18). Lightning’s 3,551 career rushing yards ranks second among all Rebels and eighth in Mountain West history.

Key Player: QB Armani Rogers is the critical link for UNLV to be successful and the critical part is keeping his health. The now-junior appeared in just six games, starting five of them, last year. Rogers finished with 601 passing yards to with 10 touchdowns and four interceptions. He finished second on the team with 565 net rushing yards to go with eight scores and a 6.1 yards-per-carry average in what basically was just half a season.

Fearless Prediction: As long as QB Rogers and the key parts in the starting lineup on either side of the ball can stay healthy, and if some of the new JUCO and underclassman can make a difference on the field, this should be the year when the program takes a big step forward under Coach Sanchez. Expect a couple win turnaround and the Rebels to see a bowl team in what will UNLV’s final season in San Boyd Stadium before moving to the new NFL Raiders’ stadium next year.