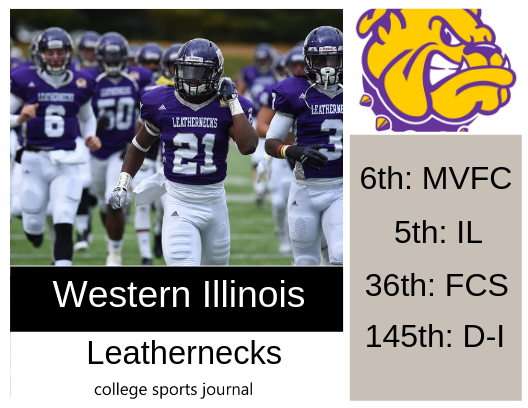 2018 In A Sentence: WIU ended last season with a 5-6 overall record (4-4 MVFC) and finished fifth in the MVFC but twice last season the Leathernecks beat a ranked opponent–against Montana and Northern Iowa.

Biggest Shoes to Fill: DT Khalen Saunders finished the 2018 season as a two-time All-American as well as a First All-MVFC selection. He capped his senior slate third on WIU’s roster with 72 tackles – 13 for a loss, which ranked fifth in the MVFC – and concluded his career ranked sixth all-time in sacks. He was selected in the third round of the NFL Draft by the Kansas City Chiefs.

Key Player: WR John Brunner was the team leader in receiving yards (625) and added three receiving touchdowns. He finished ninth in the Valley in receiving yards per game (56.8). The now-senior was named to the All-MVFC newcomer team last year and will look to provide leadership as the Leathernecks will have a new starting QB and RB.

Fearless Prediction: Even without Saunders on the defense, the Leathernecks should be solid on that side of the ball–a unit that gave up just 328 yards per game. The Leathernecks also forced 15 fumbles and 14 interceptions. The offense will be the question mark with new starters at the key QB and RB positions. If the offense can come around, WIU likely can surpass the five-win total. However, that is a big if in the always tough MVFC. Look for WIU to finish around the same as last year but likely improving as the season goes on.