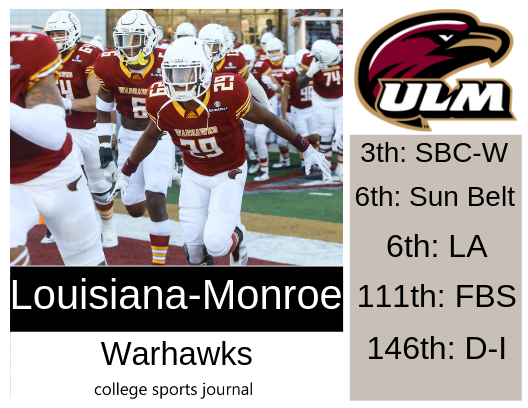 2018 In a Sentence: ULM was bowl-eligible (6-6 overall, 4-4 SBC) in 2018 but became one of four such teams to miss a bowl after a late rivalry loss to Louisiana-Lafayette in its season finale.

Biggest Shoes to Fill: WR Marcus Green led the team in receptions (50), receiving yards (855), touchdown receptions (8) and all-purpose yards (1,518) during the 2018 regular season. In his career, Green amassed a school-record 5,286 career all-purpose yards and was selected by the Atlanta Falcons in the sixth round of the NFL Draft this past spring.

Key Player: QB Caleb Evans will need to improve back to his sophomore level from two years ago. He threw 12 interceptions and the offense wasn’t quite as explosive as in 2017. Even so, he ran for 632 yards and ten scores, and hit 62% of his passes for 2,869 yards and 16 touchdowns in an All-SBC performance last season.

Fearless Prediction: The Warhawks had a bowl bid right there for the taking after a 6-4 start to 2018, but unfortunately lost the last two games and didn’t get a bowl bid. The 2012 season is the last time ULM went bowling. This year’s team should have a little more explosive offense and should have a similar defense based on what is coming back. Expect a six-win season and a bowl bid this year.