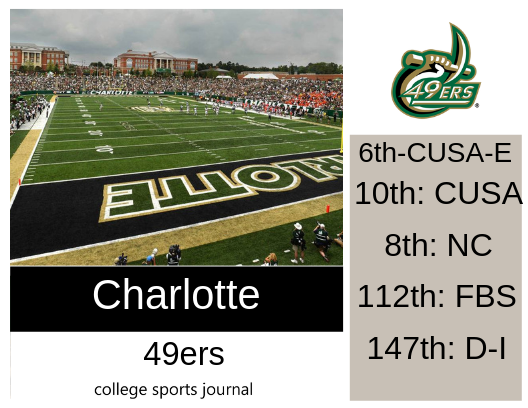 2018 In a Sentence: Charlotte finished 5-7 overall (4-4 C-USA) and was an improved football team in 2018 to set school records for wins at the FBS level and in C-USA play but did not improve enough to save coach Brad Lambert’s job. Lambert, the only coach the 49ers have had in their program’s six years of existence, ended his 49er run with a record of 22-48.

Biggest Shoes to Fill: LB Juwan Foggie was named second-team all-C-USA by the coaches last year. He led C-USA and was second in the FBS with six interceptions as a senior. He was third on the team with 68 tackles and added 3.5 TFL and 6 QB hurries.

Key Player: RB Benny LeMay was second in the C-USA with a 102.3 rushing average after becoming the second 49er to eclipse 1,000 rushing yards in a season (1,228). He was also second in the league in all-purpose yards (1,510) and led Charlotte with 11 touchdowns. The second-team all-C-USA choice by the league’s coaches enjoyed five games with 100+ rushing yards. With the new coaching staff, the rushing game of LeMay will be key to improving the 49er win total.

Fearless Prediction: Talent-wise, this is a good enough 49er team to think about going bowling, but the path to six wins probably doesn’t happen without a 3-0 start. It has FCS Gardner-Webb to start the season, and then has a trip to Appalachian State before a home game against UMass. Those first three games likely won’t be three straight wins, so the 49ers look at best will finish just like they did last year–with a five-win season.