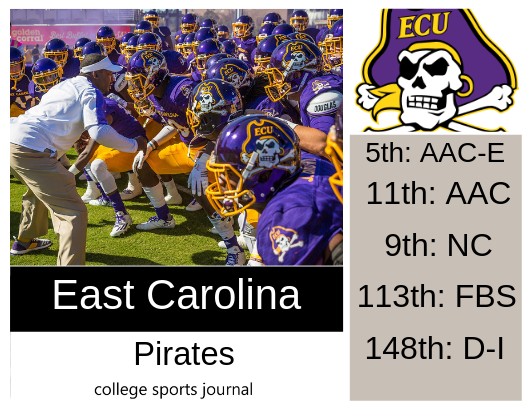 2018 In a Sentence: The Pirates finished just 3-9 overall (1-7 AAC) and finished with their third straight losing season. Coach Scottie Montgomery was fired and finished his ECU career 9-26 with a 4-20 AAC record.

Biggest Shoes to Fill: DE Nate Harvey was named ECU’s first-ever AAC defensive player-of-the-year honoree. He led the nation in total TFLs (24.0), solo TFLs (22.0), and TFLs per game (2.18), while ranking in the Top 5 nationally in sacks per game (second/1.23), TFLs yards (second/-115). He signed and undrafted free agent deal with the NFL’s New York Giants this past spring.

Key Player: QB Holton Ahlers (sophomore) was in a fight for the spot with starter Reid Herring (junior) but is expected to win the job. In splitting time with Herring, Ahlers threw for 1,785 yards and 12 touchdowns with three picks, and led the Pirates with 592 rushing yards and six touchdowns. However, he has to be far, far more accurate and consistent for the offense to improve.

Fearless Prediction: New Coach Mike Houston comes from FCS power James Madison and should turn this program around but this likely will not happen overnight. ECU only plays five teams that went to a bowl last year so it should make for a good transition. Expect the Pirates to win a couple more games than last year and could possibly get bowl eligible if everything falls just right.