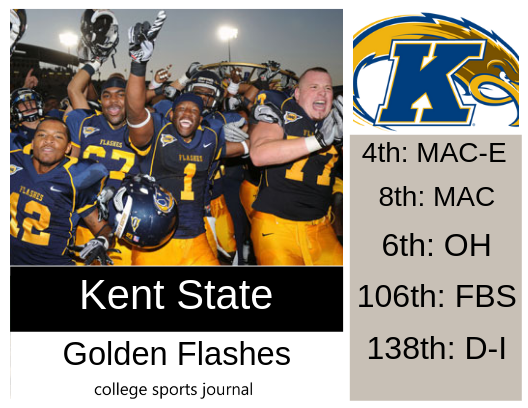 2018 In a Sentence: The Golden Flashes are one of four programs to have existed in the FBS prior to the 2010s and has not won a bowl game and last year Kent State finished just 2-10 (1-7 MAC) in Coach Sean Lewis‘ first year at the helm.

Biggest Shoes to Fill: NT Kalil Morris made a major impact on the Golden Flashes’ defense in 2018. He was a focal point of the team’s new 3-4 defense, he made 47 tackles with 6.0 tackles for loss and was named to the All-MAC Second Team. He signed a free agent contract following the NFL Draft with the Baltimore Ravens.

Key Player: QB Woody Barrett was a dual threat under center last year. He threw for 2,339 yards and rushed for another 503 yards. He had a total of 18 touchdowns and dazzled at times but also was inconsistent as he threw for nine interceptions. Now in his junior season, he will be the key member to improve if the Flashes want to improve their win total.

Fearless Prediction: All three P5 games (versus Illinois, Penn State, & Mississippi) in 2018 resulted in losses for Kent State, but the Golden Flashes held their own against these three teams in was an early sign of an upward trend in the Lewis era. The Golden Flashes return 13 total starters and with its second year under Coach Lewis, this team should improve. Expect Kent State to at least double its win total this year.