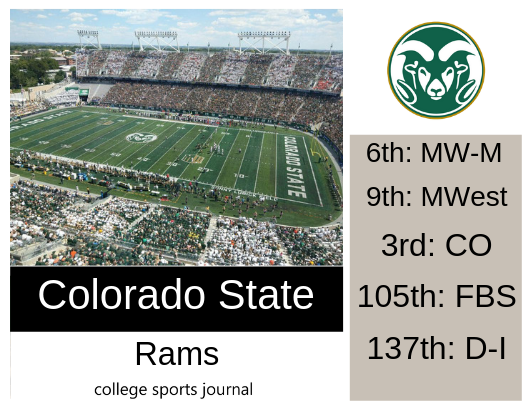 2018 in a Sentence: The bowl year of 2017 seemed like a distant memory as the Rams crashed to a 3-9 season. Losses to FCS Illinois State, Hawai’i and a 43-19 loss to in-state rival Colorado were some of the lowlights.

Biggest Shoes to Fill: LB Josh Watson and LB Tre Thomas finished 1-2 on the team in tackles (with 131 and 101 respectively). Combining for 13 tackles for loss and 3 forced fumbles, their production is going to be missed.

Key Player: In addition to losing the heart of their defense, the mass exodus of skill players also makes the job of presumed starting QB Collin Hill just that much more difficult. He loses his top two receiving threats and his leading rusher last year. To be fair he did improve a lot as the year went along, starting the last four games where the Rams were more competitive. Is Hill the type of player that can carry a bunch of inexperienced starters on his back?

Fearless Prediction: It really looks like the ceiling for the Rams could be a couple of wins unless head coach Mike Bobo answers a whole lot of questions up and down his team. FCS Western Illinois will be no pushover, but the Rams might need that game in order to get to three or four wins.