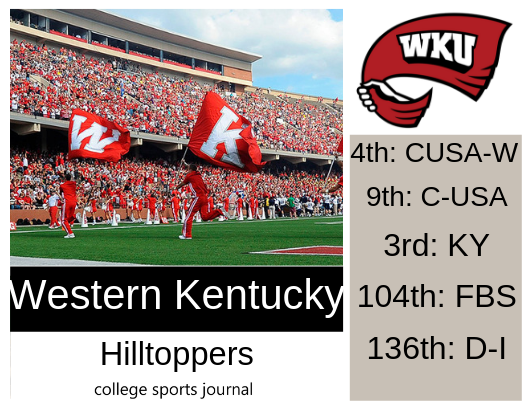 2018 In a Sentence: After a 6-7 2017 season, WKU dropped to 3-9 in 2018, losing nine of its first 10 games of the season but closed out the year with two consecutive wins but those were not enough to save Coach Mike Sanford‘s job. Sanford finished his two year tenure with a 9-16 overall mark and just 6-10 in C-USA play.

Biggest Shoes to Fill: LB Ben Holt led the Hilltoppers in tackles last season with 116. Holt had a team-best 11.5 tackles for loss, including 2.5 sacks. He forced and recovered one fumble. He was an All-Conference USA honorable mention selection. Holt did not use up his eligibility but rather is now a graduate transfer for the Big 10’s Purdue–joining prior WKU Coach Jeff Brohm. Key Player: WR Lucky Jackson is the veteran receiver who is best on the Hilltoppers combination as he has 115 career catches for 1,547 yards and nine scores. The now-senior has the upside to do far more with the coaching change and also be a valueable receiver for whomever the quarterback will be–fall camp battle between senior Ty Storey and junior Steven Duncan.

Fearless Prediction: Before last season, WKU went to four straight bowl games and went 8-4 the season before that. Now, with a new head coach in Tyson Helton (who comes to WKU after being the offensive coordinator/QB coach at the SEC’s Tennessee), ten starters back on offense, a good new quarterback option in grad transfer Ty Storey from Arkansas, and with enough talent back on defense, there’s a chance to flip the script. But the schedule is a little tough for the Hilltoppers but should still have enough talent to get to a bowl eligible season of six wins.