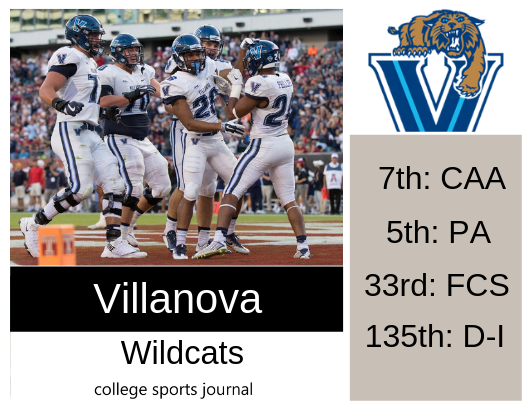 2018 In A Sentence: 2018 started with a bang for Villanova with a win over FBS Temple. The Wildcats looked like contenders in not only the CAA, but the entire FCS with a 3-1 start, but then the wheels fell off. Nova lost five of their next six games before winning the annual Battle of the Blue game against Delaware.

Biggest Shoes to Fill: Despite dealing with a number of injuries throughout his college career – which seems to be the refrain for any Wildcat player over the last few years – DB Rob Rolle put together a nice college career. Prior to injuries ruining his junior year and again affecting his senior campaign, Rolle was a DB that other quarterbacks avoided like the plague.

Key Player: DB Christian Benford picked up right where Rolle left off. The 2018 CAA Defensive Rookie of the Year had 49 tackles and five interceptions as a freshman. Benford hauled in three interceptions in one game against Richmond. He is one of the top DBs in the CAA and should do nothing but improve.

Fearless Prediction: Villanova has been besieged by the injury bug over the last few years, causing them to fall short of expectations. The Wildcats look like a mid-pack CAA team with the potential to jump up and surprise an expectant foe in an upset – if, for a change, they can stay healthy.