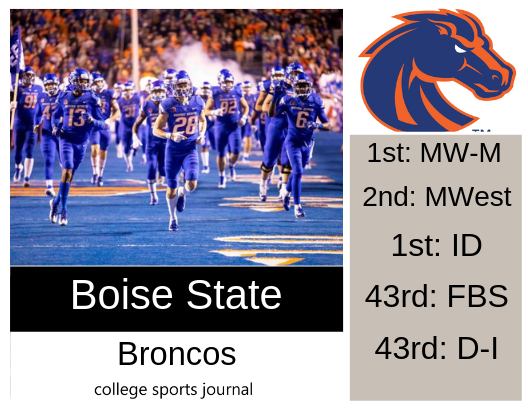 2018 In a Sentence: The Broncos fell short of winning their second Mountain West title in three years when they lost 19-16 in overtime to Fresno State in the MW title game and was the last official game as Boise State’s trip to the First Responder Bowl against Boston College resulted in a game cancellation due to lightning in the first quarter with the Broncos trailing 7-0 for a 10-3 overall (7-1 MWC) finish.

Biggest Shoes to Fill: QB Brett Rypien was named the MWC Offensive Player of the Year after finishing with 3,705 yards and 30 touchdowns. He finished his career as the Mountain West’s all-time leader in passing yards (13,581), completions (1,036), and 300-yard passing games (21). He went undrafted in the NFL Draft but signed as a free agent by the Denver Broncos.

Key Player: QB Chase Cord, Jaylon Henderson or Hank Bachmeier are battling to replace Rypien. The frontrunner is Cord and appears to be the top challenger is true freshman Hank Bachmeier with senior Henderson behind. That battle to be the starting quarterback heading into the Florida State game in Week 1 . Whoever wins will need to control the turnovers as the Broncos’ strength is

Fearless Prediction: While there seems to be some holes to fill with the quarterback as well as the running back but the defense is solid and could be one of the best in not only the Group of Five but all of the FBS. The schedule as favors the Broncos as it avoids Fresno State and San Diego State from the other MW division. Look for the Broncos to win the MW Mountain Division again this year but probably will stumble a game or two getting there.