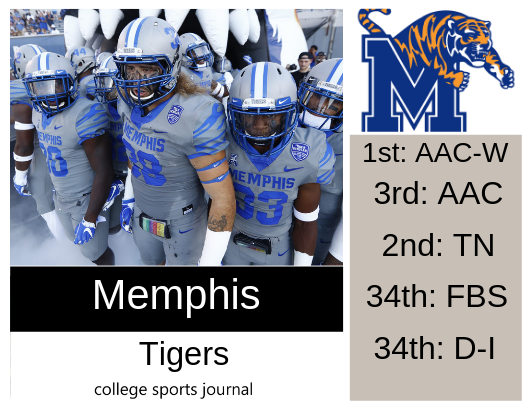 2018 In a Sentence: The Tigers were 4-4 following back-to-back losses to UCF and Missouri. It was the worst start by a Memphis team since 2013. The team responded by winning its remaining four regular-season games, securing the Tigers’ second consecutive appearance in the AAC Championship Game against UCF. Memphis saw its 17-point second-half lead evaporate along with its chances to win a title. The Tigers followed the championship-game defeat with a loss to Wake Forest in the Birmingham Bowl to fininish 8-6 overall (5-3 AAC).

Biggest Shoes to Fill: RB Darrell Henderson and RB Tony Pollard were a teriffic duo in the backfield for the Tigers last year. Henderson rushed for 1,909 yards and 22 touchdowns last year, while Pollard had 552 yards on the ground. The duo both were drafted in the NFL Draft–Henderson in the third round by the Los Angles Rams and Pollard in the fourth round by the Dallas Cowboys.

Key Player: QB Brady White was the fifth Memphis quarterback to tally more than 3,000 yards passing in a season after totaling 3,296 yards. His 26 touchdowns are the fourth-highest in a single season by a Memphis quarterback, joining Paxton Lynch (28) and Riley Ferguson (32, 38). With the running game losing a lot of production White will be key to passing even more.

Fearless Prediction: Memphis has the talent and experience to once again be the favorite in the AAC West Division. But the team’s struggle to finish games has cost it dearly during the past two seasons, including a conference championship in 2018. Poise under pressure will be crucial, especially in November when the Tigers face Houston, USF and Cincinnati during back-to-back-to-back weeks. Look for the Tigers get to its third straight AAC title game but again fall just short of winning the league.